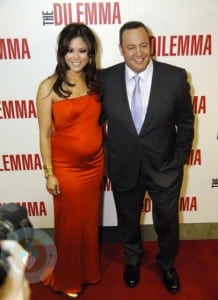 There is a reason to congratulate Kevin James and his wife Steffiana today! The couple is now the proud parents of a son – the first born in the family.

Kannon Valentine James was born in Boston on Easter Sunday. He joins his older sisters, Sienna-Marie, 5, and Shea, 3.

Kevin is best known for his role on CBS series, King of Queens, but he was recently seen on the big screen in The Dilemma. Next up for him is Zookeeper.

Two men surrounded by women. Kannon has helped even the count in that house.