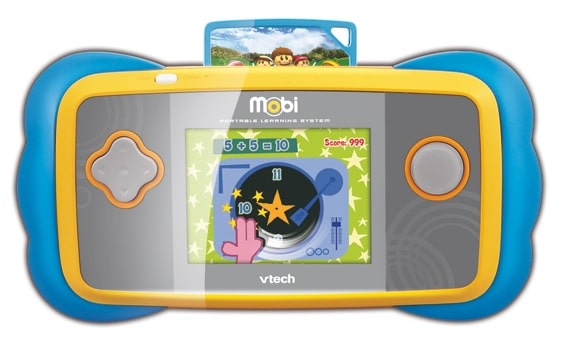 VTech’s MobiGo is the company’s new handheld device created for 3-8 year-olds. This touch screen edu-game is the next generation of handheld toys combining one of today’s hottest electronic features with important early learning skills.

To get started you will need to install 4 AA batteries into the back.  VTech has a special software that you should sync with your MobiGo to take advantage of their exclusive offers and to download some of their games. As an incentive, they are offering free downloads for a year to parents when they register their unit. 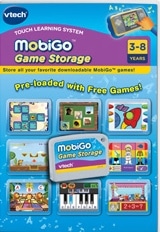 The memory on the device will only allow you to store about 3 downloaded games, but that can be increased to 10 if you buy an additional cartridge.

The only thing I don’t like about this is that the downloaded games only appear JUST after the file transfer and will need to be re-transferred after every power-up. The only way to avoid this is to purchase the game storage card that I mentioned above as the device doesn’t appear to have any long term memory. The bonus to this is that the card comes pre-loaded with 8 games.

The MobiGo does however come with a ‘touch and learn’ cartridge that has 6 games on it , each with 2 levels of difficulty.

Each game is designed to teach your child a new skill whether it’s problem solving and numerology or including math, vocabulary, spelling and the alphabet. 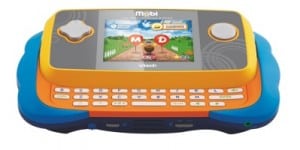 The MobiGo has been a big hit with both my 23-month-old and my 5-year-old sons. Even though my youngest is too young to figure out how to work it, he enjoys playing with some of the downloaded games like keyboard jam and DJ beats as there is little skill involved just screen tapping.
For years my oldest son has had a thing with smartphones. He loves to play with them a pretend that he is sending e-mails or taking pictures. Because the MobiGo slides up like a smartphone to reveal a full QWERTY keyboard, he thinks he has his own mobile device fully loaded with fun things that he can do.

To further our test we purchased the SHREK Forever After game(aged 4-6) for him and it has been a hit. This cartridge has 8 games and it uses the characters from the movie to teach spelling, shapes, colors and logic. Each game has a little cartoon to introduce it, which is cute and SHREK appears all of them. Kids can protect him from a flying witch that throws pumpkins,  test their skills at apple bowling and help SHREK and donkey navigate their way through a dark cave.

The MobiGo is a great on-the-go game that will offer hours of learning while your child plays. Their impressive line-up of learning games includes some of the most popular characters with the 3-8 age group. Disney Princesses, Cars, Toy Story 3, Tinkerbell, Dora and Ben 10 are just a few available for purchase.

VTech is offering one(1) Growing Your Baby reader the opportunity to win a MobiGo Handheld Device (ARV. $60).

Congratulations to our winner: Betsy Hoff