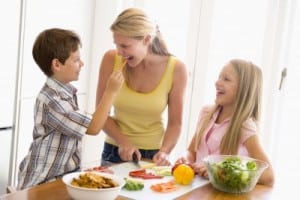 Picky eaters; many households have them.  In my house it’s my husband.  But, if your picky eater happens to be a child, listen to this.  Parents might be making them pickier.

The study involved a survey of 213 mothers whose children were between the ages of 7- and 9-years-old.  The respondents were asked to assess their children’s responses to food i.e.:  did they overeat if they were given the opportunity, did they eat slowly or did they frequently leave their food unfinished.

They were also asked to analyze their own strategies to their children’s mealtime habits i.e.:  did they attempt to make their children eat, even when they weren’t hungry and did they believe their children would overeat if there weren’t parental restrictions in place.

Wardle and her fellow researchers found a correlation between parental pressure to eat healthfully and the degree to which children become picky eaters.  They also found that the more a mother restricted food, the more likely the mother was to report that her children would overeat, given the chance.  These correlations were seen irrespective of the children’s weight.

Wardle acknowledges that these findings don’t necessarily mean that parents’ are causing their children to overeat or be fussy eaters.  Rather, parent’s strategies may be a response to behaviours the child is already exhibiting.

The researchers wrote, “With growing evidence of a genetic basis to eating behaviour and food intake in children, the present results are consistent with the idea that mothers’ feeding practices are, to some extent, responsive to their children’s predispositions toward food.”

But Wardle and her colleagues stressed that children may both influence and be influenced by their parents’ mealtime rules and it is important to recognize the roles both parties play in this frustrating dance. – Jen R, Staff Writer