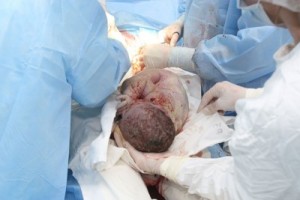 According to previous studies, inducing labor could increase the chances of needing a C-section. However, a new study, published in the online version of BJOG suggests that the former studies may actually be incorrect.

Cesarean section rates have increased drastically over the past several years – about 12% over the last 15. In fact, it is now the most commonly performed surgical procedure in the United States. Rates vary from one hospital and part of the country to the next, ranging anywhere from a prevalence of 69.9% to as low as 7.1%.

Obviously, all surgeries come with risks. For mothers, that risk can be seen as a higher risk of infection and possible bladder or bowel injuries. But when it comes to a C-section birth, there are also some risks for the baby. Infants born via cesarean are at a higher risk for a number of complications, including breathing problems. Some studies have suggested that this may have something to do with the beneficial bacteria transferred from mom to baby during a vaginal birth. So, with all these risks, it makes sense why there are many doctors who would like to bring the C-section rates down.

In previous years, one of the ways that doctors have tried to bring cesarean rates down by avoiding pre-planned or induced labors. However, this may no longer be needed if the recent information from the University of Calgary in the UK continues to hold up.

Led by Dr. Stephen Wood, the University of Calgary analyzed clinical trials that included women 37 to 42 weeks pregnant whose labor had been prolonged – 6,200 were randomly selected to be induced and 5,900 who were selected to wait for the natural labor process to start on its own. When looking at the results, researchers found that about 20% of the women who waited for natural labor ended up needing a C-section, compared to just 17% of those in the induced labor group.

Interestingly enough, this is a direct contradiction to what previous studies have shown, even if the difference is slight.

“It’s quite remarkable that the studies do a show a slight reduction of C-sections,” Wood told Reuters Health.

However, not everyone is convinced that the study should be taken at face value. Not yet, at least.

“It’s really premature to try and reach a conclusion about what might make a difference for it,” Soo Downe, a professor from the University of Central Lancashire in the UK told Reuters Health.

Wood and the other authors did agree that “additional trials are needed,” and they admitted that the results could have been the result of “non-treatment effects.” However, Wood also says that expectant mothers, especially those that have already passed their due date, should be able to have a little more peace of mind when it comes to the induction process and their likelihood of needing a cesarean.