Home » Larry Birkhead Talks About Closing One Chapter and Beginning Another

Since being granted custody of his little girl, Larry Birkhead and Dannielynn, 2, have been living at Anna Nicole Smith’s former home in LA’s Coldwater Canyon.

In an effort to raise his toddler in a more stable environment, Larry has decided to move out and find a new home. Now Larry must go through the bittersweet process of packing up Anna’s belongings and readying Dannielynn for yet another big move.

Larry, 35, spoke to Life & Style about the painful memories of the past — and why he’s eager to make a fresh start for the future. 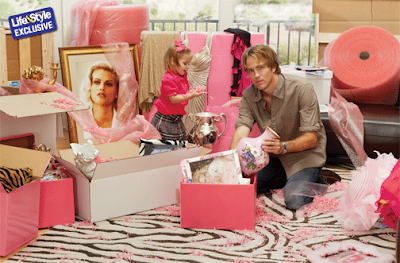 L&S: After Anna’s death, what made you decide to bring Dannielynn to Anna’s home?

Larry: There were just tons and tons of memories. Anna’s reality show was taped here, and it’s the place she called home. After she passed, I just couldn’t bear to part with it.

L&S: So why are you selling it now?

Larry: You know, I always said I’d never sell, but the longer we’ve been here, the more I’ve realized it’s not built for children. We live over a canyon, and while the view’s great, there’s no backyard. I’ve bought Dannielynn every toy under the sun, but they can’t replace a yard. She doesn’t have a place to have her friends over to play.

L&S: Do you have any ideas about where you’ll be moving to?

Larry:I’ve already seen one house in the Calabasas area that I really liked. It’s a little farther out in LA than we are now, so it’s less crazy. And there are tons of children in the neighborhood. It seems very kid-friendly.

L&S: So you’ll definitely be staying in Southern California for now?

Larry:We’ll travel back and forth between here and Kentucky, where I’m from. I bought a 10,000-square-foot house in Louisville, near my family. I’ve thought about moving there permanently at some point, when it’s time to find a good school for Dannielynn. That will be on the horizon soon.

L&S: You’ve kept an entire closet of Anna’s clothing, accessories and jewelry. Is that another way of preserving her memory for Dannielynn?

Larry:Yes. Every piece in there has a story. Someday, I hope to show them all to Dannielynn and tell her what event her mom wore them to and what they meant to her — from the casual T-shirts to the fancy dresses. I want her to understand how beautiful and glamorous her mom was.