It’s heartbreaking to think that a mother might have to stand by her child’s hospital bed, unsure of whether or not that child will survive. What if that mother was powerless in deciding whether or not her child received life-sustaining treatments? This is exactly what’s happened to a very young mother in Maine. 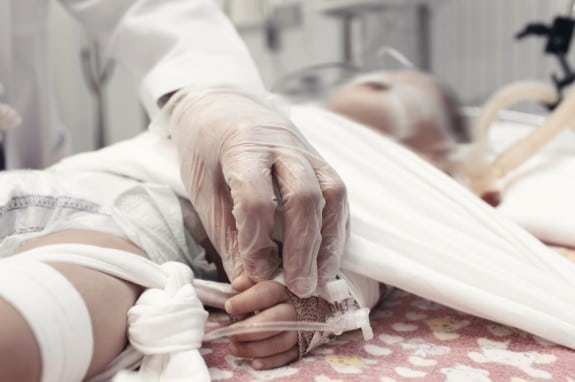 According to Fox News, one-year-old Aleah Peaslee went into a coma at six months of age when her 21-year-old father shook her in an apartment last December. After the incident, the girl suffered from multifocal seizures and went into a “deep coma.”

Doctors attempted to remove her from a ventilator, but were unsuccessful. She was said to be blinded by the incident and to be “neurologically devastated.” The family ended up signing a DNR order after being told that Aleah would not recover. But after being placed in the arms of her mother, Virginia Trask, the child unexpectedly regained consciousness.

Realizing that there might be hope for little Aleah, the family attempted to revoke the DNR order, but State child welfare officials, who had taken custody of the child because of alleged abuse, refused to do so. Welfare officials even went so far as to take the case to an Augusta District Court judge in which it was ruled that “neither parent can be counted on to be physically or emotionally available to make the necessary informed decision when needed.”

But Virginia’s lawyers, which include attorney Scott Hess as well as other advocacy groups, say otherwise, and they are currently preparing to appeal the case before the Main Supreme Judicial Court on September 23rd. And, thanks to the support of Governor Paul LePage, they just may very well win their case.

LePage has reversed state bureaucrats and has even gone so far as to vow that he would defy a state Supreme Court ruling, if necessary, to help back this young mother. His reasoning? He told Fox News that he feels that the state child welfare officials should not be allowed to usurp a parent’s legal rights, regardless of what the courts say.

“This case is disturbing and not reflective of my administration’s position that a parent who is the legal guardian of their child should have the final say in medical decisions about life-sustaining treatment,” LePage told Fox News. “The existing law violates the sanctity of parental rights, and I cannot support it. Unless a parent is deemed unfit and parental rights are severed, the state should not override a parent’s right to make medical decisions for their own child.”

An ADF official said that Virginia’s lawyers are encouraged by LePage’s stance, but they are prepared to move forward with the case, should it be necessary. The ADF is yet another big hitter in the mother’s corner, and they have filed friend-of-the-court briefs in an argument that says the state officials, who currently have custody of the child, are holding the DNR in place when they don’t have the constitutional right to interfere with Virginia’s parental rights.

“This case is about fundamental rights: the right to live, and the right to parent,” the 25-page brief from the ADF states.

And Attorney David Crocker, who is serving as legal counsel on behalf of the groups that filed the brief, said that the case centers around the question of who gets to make the ultimate decision regarding a child whose parent never lost their rights.

“Who gets to make these decisions?” Crocker told Fox News. “The precise legal issue here is: Does the state get to make that kind of life-or-death decision when parental rights have not been formally terminated? That’s the $64,000 question.”

Aleah is currently in foster care, and her current condition is unknown. However, if she does die – either because of the DNR still being in place, or despite it being lifted – the father, who is not allowed to see the child or her mother could face even bigger charges. He is currently out on bail and no longer involved in the child’s DNR decision.