For the first time since their arrival on April 30th, the world got a peek last night at Mariah Carey and Nick Cannon‘s twins Moroccan and Monroe! 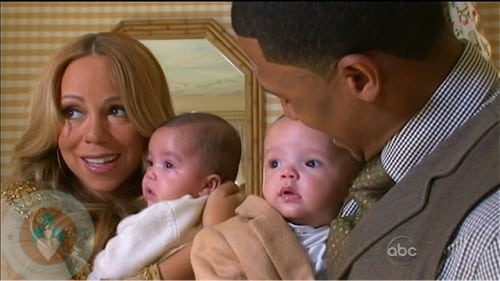 On top of presenting them on television during an interview with Barbara Walters, the couple has also set up a website called DemBabies.com(no longer active) that features 15 intimate photos of Mariah and Nick with the babies.

We are elated to finally be able to show you some pictures of the beloved additions to our family.

They are Ms. Monroe Cannon & Mr. Moroccan Scott Cannon aka Roc & Roe.  We deliberated for so long about how to reveal the first pictures of our babies to the world. We just didn’t want to do the typical thing and display them in a tabloid (not that there’s anything wrong with that).

We decided to share this beautiful experience with you in a special intimate portrait of our family.

Parenthood is absolutely the most life changing experience we could ever have imagined. The love we feel for these babies is above and beyond anything we’d ever dreamed of.

Proceeds from the purchase of the photos go to the Fresh Air Fund’s Camp Mariah in hopes of drawing awareness to human rights and giving kids a great Summer.

As expected the babies are adorable. For their television debut they were both dressed in all white with Moroccan wearing a tan jacket.

During the interview Mariah spoke about her tough pregnancy.

“I don’t think I understood the enormity and the magnitude of what it really does to your body,” Carey said. “Carrying two babies. Unless somebody’s been through it, it’s difficult to understand what I went through, because my pregnancy was very unique in terms of what happened to me.”

She was on long periods of bed rest, had many false labors and ended up in the ER several time. Late in the pregnancy, she acknowledged, she could barely move or get out of bed by herself.

“I had serious back problems,” she said. “I was afraid I wasn’t going to be able to walk properly again. It was a huge strain.”

At 35 weeks gestation by C-section the twins arrived with her song “Fantasy” was playing in the delivery room.

“They came into the world to a live version,” she said, “and the only reason I wanted it to be the live version is because I wanted them to hear the applause upon entering the world.”

Both Nick and Mariah told Walters they could not be happier with their new family.

“My family gives me everything,” Cannon said. “Unconditional love means…the world to me. I mean, it’s completion.”