Martha Stewart played doting grandma to Jude, her daughter Alexis’ little one, while taking the tot out for a stroll in West Village in New York City. 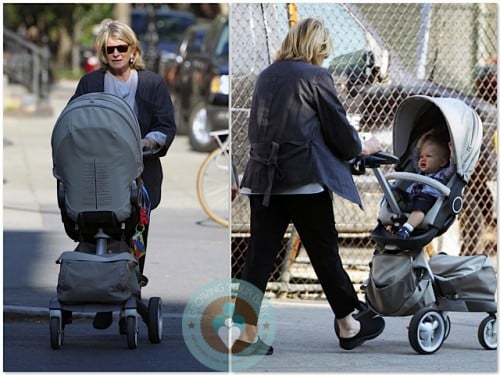 Her show may be winding down on the Hallmark Channel, but it was announced on Thursday that she will be moving to PBS to host a new show called, ‘Cooking School’.  The half-hour episodes are built around Martha’s cookbook and will feature step-by-step classic cooking techniques.

“PBS is the perfect home for this series,” Martha said in a statement. “We’ll show viewers how to prepare classic dishes as well as how to use proper techniques. This new series combines many of my passions, teaching and encouraging others.”

Also look For the domestic goddess to show up on prime time on May 2 for an episode of NBC’s “Law & Order: SVU” and on May 7 for the hour-long season finale of “2 Broke Girls”.