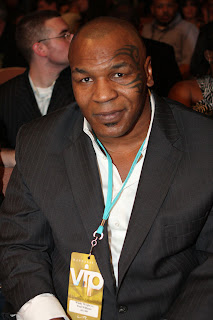 Boxer Mike Tyson’s 4-year-old daughter is on life support after she was found with her neck on a treadmill cable Monday, police said.

Exodus Tyson was found by her 7-year-old brother Miguel on a treadmill with the cable attached to the exercise machine at their Phoenix home, police Sgt. Andy Hill said, calling it a “tragic accident.”

The boy told the girl’s mother, who was in another room. She took the girl off the cable, called 911 and tried to revive her.

Responding officers and firefighters performed CPR on the girl as they rushed her to a nearby hospital, where she was in “extremely critical condition” and on life support, Hill said.

“Somehow she was playing on this treadmill, and there’s a cord that hangs under the console — it’s kind of a loop,” Hill said. “Either she slipped or put her head in the loop, but it acted like a noose, and she was obviously unable to get herself off of it.”

The former heavyweight champion had been in Las Vegas but flew to Phoenix immediately after learning of the accident.