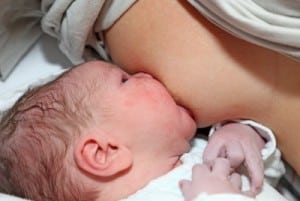 Unfortunately, bpas says that the result has been in increase in the number of unplanned pregnancies among new moms. Because of this, bpas has issued an advisory. In that advisory, a spokeswoman from bpas stressed how important it is that moms be given the right information regarding the use of breastfeeding as a form of contraception.

“Women are coming to our clinics having become pregnant by mistake,” a spokeswoman from bpas told MailOnline. “Often, their GP has told them that breastfeeding is an effective form of contraception. It is an excellent form of contraception – if you do it exclusively. If you miss one feed, it is not reliable. Exclusive breastfeeding can provide highly effective contraceptive offer, but only if strict criteria are met.”

And according to bpas, many of these mothers are supplementing, which means that breastfeeding isn’t able to offer them complete protection from pregnancy. But that’s not the only issue bpas is concerned about; in addition to the misinformation being given about the contraceptive limits of breastfeeding, new moms are not being given the right information about their contraception alternatives. In fact, a survey conducted by bpas and Mumsnet found some serious gaps in the contraception advice and support given to new, breastfeeding mothers; 32 percent of women breastfeeding or planning to breastfeed said that they had not received any information about safe contraceptive options by their health care provider. And of more than 1,000 women who had given birth in the last three years, the majority reported that post-natal conception wasn’t discussed at all during their pregnancy. In fact, more than half said that contraception wasn’t even discussed until their six week postnatal follow-up. All of this goes against the expert guidance issued by the National Institute of Clinical Excellence and the Royal College of Obstetricians and Gynecologists.

“It is worrying to hear that some women are not receiving accurate information about the contraceptive cover provided by breastfeeding and that some are even receiving conflicting advice from different medical professionals about what contraception they can use whilst breastfeeding,” the spokeswoman from bpas said. “At bpas, we are concerned to see women facing the turmoil of an unplanned pregnancy within months of giving birth, including new mums who had not been given the right advice from medical professionals about contraception whilst breastfeeding. Given the emphasis on encouraging women to breastfeed, it is incredibly important that information is given about the limitations of this as a form of effective contraception, and what other methods can be safely used at the time.”

According to the Advisory Service, there are several contraception options that are safe to use while breastfeeding, including progesteren-based methods like the mini-pill and the coil; anytime that a mother plans to do anything other than exclusively breastfeed, these options should be discussed.