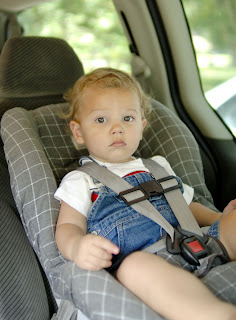 Since starting this blog 2 years ago, I’ve been surprised by the number of stories I have read about children, mostly infants, being left in hot cars alone. In some cases, a passerby will see the child and call authorities, but in many the child goes unnoticed and dies.

The sad part is when you read that the child was forgotten by a caretaker while mom or dad is at work.

This is what happened to Dee Ryan when her one-year-old was left in a hot car while her babysitter ran errands.

The 1-year-old’s temperature was nearly 106 degrees when the ambulance arrived at her babysitters home, but it was too late.

Aslyn Ryan had been found limp and unresponsive after being left in the car for 50 minutes while her caretaker ran errands, her mom remembers. She spent two days in intensive care and suffered multiple strokes and other hyperthermia-related injuries before she died in 2004 at Kapi’olani Medical Center for Women & Children in Honolulu.

“I never, as a nurse, could have dreamed what the horror of walking into the ER would be to see a code being performed on my own child,” Ryan wrote in testimony to the state Legislature in support of a law that makes leaving a child unattended in a car a violation of the state’s traffic code and sets fines for violators.

There are many organizations that have launched awareness campaigns.

Every year hyperthermia takes the lives of about 35 children. So far this year, 23 infants and children have died in hot cars, Null’s research shows. Since 1998, 364 have died.

“I’m an advocate for zero time,” Jan Null says. “You don’t leave a child in the car for a 10-minute run into the bank because it ends up being 30 minutes because the person in front of you has 14 foreign checks to cash.”