Home » Mom to Glam ~ Julie Bowen Takes Her Boys To The Market Before Attending Golden Globes!

There was no day of pampering for Julie Bowen before the Golden Globes on Sunday afternoon. Instead the mom of three was spotted in yoga pants and a puffy jacket with her hair in a ponytail at the market with her three boys just hours before she was scheduled to walk the red carpet at one of the years most prestigious award shows. 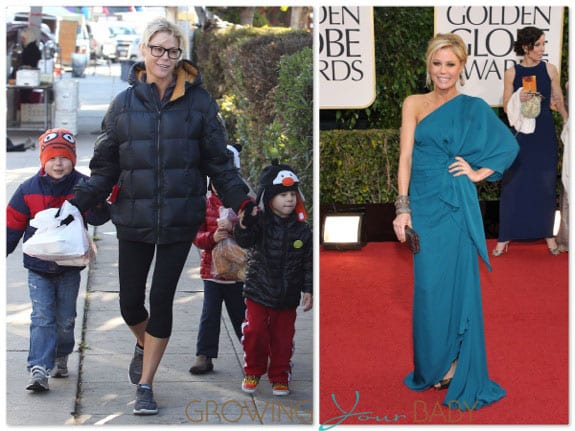 While dressed in a one-shoulder turquoise Halston gown, the actress dazzled at the event.  The whole cast of her hit show Modern Family was on hand as they were nominated for Best Television Series – Musical or Comedy.  Despite winning last year, the show lost out to the HBO comedy ‘Girls’.

Julie, herself, has won an Emmy for best supporting actress award twice.  She told Metro UK that the awards sit in her office, but her kids aren’t aware of how precious they are.

They are in my office. This year’s is next to the busted one from last year. That started out on a lower shelf in the playroom and my son broke it. Apparently that happens all the time with Emmys. They’re very pointy and they’ve got lots of parts, not like… I guess maybe an Oscar, which is more solid and simple.