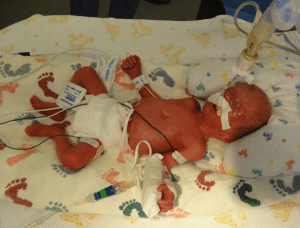 Last Thursday, a team of more than 50 medics at UT Southwestern Medical Center were busy with a special delivery. They successfully welcomed into the world quintuplets – three boys and two girls born to missionary couple Carrie and Gavin Jones.

“We praise God for His mercy and love in bringing these five new lives into ours,” said Gavin and Carrie. “The whole delivery went flawlessly from beginning to end. The doctors, nurses, anesthesiologists, respiratory therapists, and everyone else on the UT Southwestern team were amazing.”

The babies, Will Edward, David Stephen, Marcie Jane, Seth Jared, and Grace Elise were born at 27 weeks weighing between 1 lb. 12 oz. to 2 lbs. 11 oz.  Because they are so small all five have to stay at the unit till they are strong enough to go home.

“The infants are doing as expected for quintuplets born at 27 weeks,” said Dr. Gary Burgess, medical director of the Neonatal Intensive Care Unit, who is overseeing care for the five children. 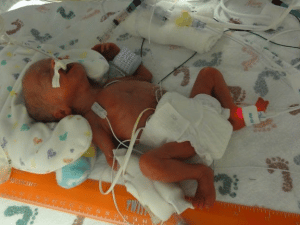 The high profile delivery was attended by a team of fifty medical staff and all five babies were born within five minutes between 10.01 and 10.05 am. Within 13 minutes, information on the babies was added to the electronic medical records system for use by the medical team.

The couple, who are already parents to an 8-year-old son, serve as missionaries in the South Pacific nation of Papua New Guinea, north of Australia.

“We have been blown away by the outpouring of prayers and support for us through this unexpected journey,” Gavin said.  “We are especially grateful to the team of professionals at UTSW who have gone beyond the call of duty in preparing for the babies and caring for Carrie.  They have been amazing!”

According to Dr. Patricia Santiago-Munoz, assistant professor of Obstetrics and Gynecology in Maternal-Fetal Medicine, who delivered the babies, the birth went as expected because of month’s of coordination of the team and Carrie’s strong spirit. The team had devised a special ‘code 5’ alert when the time came, just for this delivery.

Dr. Munoz has had experience delivering 2 sets of quintuplets earlier, and says that the Jones have been an ideal couple.

“For all the anxiety that a quintuplet pregnancy generates, Carrie and Gavin are the perfect couple to have held it together,” said the doctor. “A birth like this takes a village.”

She revealed how the entire team practised months before the actual procedure to be sure that all went well during the actual delivery.

Special CODE 5 pagers were handed out to notify the teams and a color-coded system too was developed to match each baby with its needed supplies. Weekly drills were held and early efforts made to ensure duplicate equipment and back-up systems were ready. 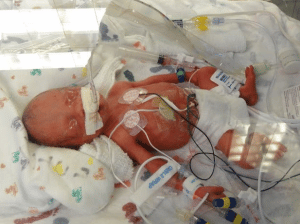 Each baby was also assigned his or her own team of neonatologist, neonatal nurse practitioners, nurses, respiratory therapists, pharmacists, and radiology technicians.

The rare quintuplet births are the first delivered at St. Paul Hospital and the third quintuplet delivery by specialists in the Ob/Gyn Department at UT Southwestern.

For the Jones the unique birth is just the beginning of a journey of raising five beautiful kids all at once.