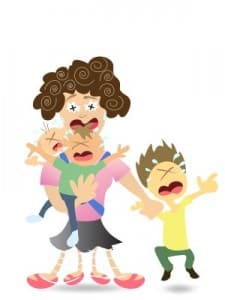 Your true friends will admit that parenthood is a challenge. Add more kids, extracurricular activities, a tough economy and you could have some very chaotic days.

Knowing this, Parenting.com and MSNBC teamed and surveyed more than 26,000 moms about their secrets and confessions.  Oddly, what they found wasn’t really that shocking.  We are all trying to get by and sometimes we do or feel things that we’re not proud of.  And even though we are in a ‘confessional culture’, there are some things moms just don’t say out loud.

The secrets the survey revealed were:

And sometimes the secrets are thoughts we don’t dare tell anyone else:

Being a mom and trying to do everything perfectly can be incredibly stressful. This can cause the opposite to happen.

I am lucky to have a great group of friends who are completely honest about their struggles and parenting challenges.  They are a great resource  when I need advice and can relate when I am having a bad week.  They don’t judge when they call to chat and my boys are running around screaming or fighting.  Yes, I said it.  My kids scream and fight.  And just like you the Summer has been, well… a challenge.

This survey is great for a couple reasons.

2.  It shows moms that parenthood isn’t a competition, but the most important time to share your issues.

“That’s the golden thing, when you share with another mom and you’re open with another mom, you’re going to get a laugh,” Michele Borba, author of “12 Simple Secrets Real Moms Know” said “We all have deep down one thing in common: we want our kids to turn out healthy and happy.”

Moms who have just moved to a new city or are the first of their friends to have a baby should look for drop-in playgroups to visit to meet other moms with like-aged children.  When I had my first son I would also take him to play gyms to meet other moms. Not only was it a great time to chat but it was good to see that the other kids played the same way he did, which made me feel like he was on track developmentally.

Betheny Cox sums it up perfectly.  She told Todaymoms,

“This is information that seems ugly, which is why people don’t talk about it.  I do know mothers who seem perfect, and who probably would be shocked and horrified to hear me admit that I don’t like my little angels regularly.  If we could all just be a little bit more honest with each other about the realities of the situation, that would relieve at least part of the pressure.”

At a time when moms feel like pressure to be perfect, it’s nice to sometimes to know that very few people are.