A new study published in the March issue of the American Journal of Obstetrics and Gynecology found that when women were given an extra hour to push in the second stage of labor, c-section rates went down by roughly 50%. While this new study is small and unlikely to change medical norms soon, researchers believe it provides a much-needed critique of standards that may be outdated. 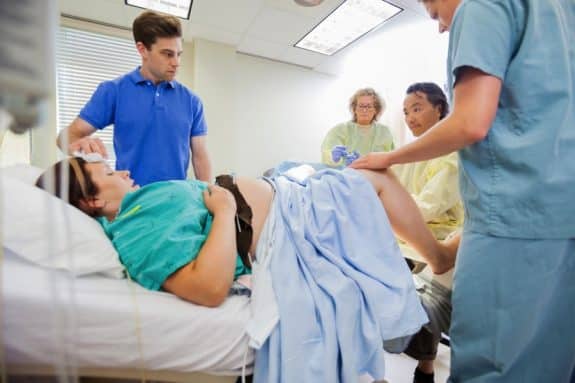 First-time moms generally have three hours to push their baby out if they have been given an epidural, two hours if they haven’t. More time is generally considered as an extended labor, and healthcare providers may then move to a c-section or assisted delivery with a vacuum or forceps.

One of the authors of this new study is Dr. Alexis Gimovsky, a fellow in maternal fetal medicine at Thomas Jefferson University in Pennsylvania. She says the time standards  came “from expert opinions in the 1800’s.” Dr. Gimovsky also says that since then, only retrospective data has been used to validate those guidelines.

In the 1950’s, researchers studied earlier data and found that women who delivered their babies within two hours had lower rates of infection and serious postpartum bleeding. In 1955, another research team concluded that most women who did not receive anesthesia gave birth within a two-hour time frame.

For the new study, 78 first-time moms at Thomas Jefferson University Hospital were randomly assigned either the normal 3-hour time limit for labor, or allowed an extra hour to push. All of the women had epidurals.

43.2% of the women given the typical three hours to push ended up delivering via c-section, as compared to just 19.5% of the women who were given an extra hour to labor.

The purpose of the study is to ensure that the guidelines doctors rely on are based on strong and clear evidence. Prior investigations indicate that women today take longer to labor than they did 50 years ago, although the reason for this is not clear. The study hopes to make obstetricians aware of how long a “normal” labor should be.

Currently more than 30% of births in the US each year are c-sections, and about 10-15% of those take place in cases where the second stage of labor is stalled. Prior research has found risks to mother and baby when labor goes on too long, and Gimovsky says this is an area that “requires further investigation.”

For many women and their babies, c-sections are vital and can save lives. But the new study empowers women to talk to their doctors about their options and see if they are a candidate for waiting longer before surgical intervention.