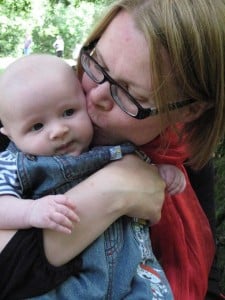 The survival rates for ovarian cancer are bleak. This is partly due to the fact that it is so hard to detect during the early stages. And even when symptoms are present, the condition is sometimes misdiagnosed. Andrea Hynes-Whalley found this out first hand.

“I was on my honeymoon in June 2005 when I started getting bad cramps in my stomach,” Andrea told the UK’s Daily Record. “The following summer, in June, I collapsed after I pressed on my pelvis to find out where exactly the pain was coming from.”

Andrea was rushed to a hospital. At the time, doctors told her it had probably been a femoral hernia. She would later learn that she had likely put pressure on a tumor and stopped blood flow to the area.

Just a few days after being discharged from the hospital, Andrea noticed more symptoms; she’d developed a bad rash. Again, doctors missed the tumor; they told her that she had probably picked up something from one of the patients in the intensive care unit while in the hospital, and then they sent her home.

“I had the strongest gut feeling – I’ve never experienced anything like it before. I kept going to the doctor and I was turned away,” Andrea said. “But I knew [something] was wrong.”

Over the next two weeks, Andrea’s health continued to decline. Then she suddenly started to bleed uncontrollably.

“It was like a bag had burst inside me, suddenly all this blood just came rushing out,” she said.

She went to the doctor yet again, and again, doctors missed the tumor.

“I just knew something wasn’t right,” Andrea said. “That’s why I kept going to the doctors – although I didn’t have the typical symptoms of ovarian cancer. The doctor actually asked me, ‘Are you sure you’re not having your period?’ I was so frustrated.”

Andrea finally decided to seek out a second opinion where she demanded that the doctor give her an internal examination. Unfortunately, she experienced so much pain during the procedure that the doctor decided that it would be best to send her out for an ultrasound and blood work instead.

All along, Andrea’s gut had told her that there was something seriously wrong. When the results came back, that gut instinct was confirmed. She had a tumor, and it was at stage one. Doctors told her that she needed an operation as soon as possible.

“There was no time to wait,” Andrea said. “I did know something was wrong, but not to the extent it actually was in the end.”

Yet, despite the seriousness of Andrea’s condition, there was still this strong urge to have a family; an urge that she says she just couldn’t ignore. That urge fueled all of her decisions regarding treatment.

“My urge to have a family was so strong,” she said. “I decided to research surgeons and I wanted minimal surgery. I didn’t have any children and I refused to have a hysterectomy.”

Andrea ended up finding a surgeon that was willing to go forward with as little reproductive organ removal as possible. The surgery took place in October 2006. She was able to keep her uterus, but as far as her ovaries were concerned, there was very little left.

“It was bigger than the surgeon expected, but he was confident that they had got it out,” Andrea said. “I was left with only a small part of my left ovary due to a dermoid cyst 11 years previously.”

But even with just a sliver of her ovary, Andrea still had hope for a family. She even decided to forgo chemotherapy because she was concerned that doing so would further minimize her chances of getting pregnant. Instead, she went in for regular check-ups where doctors followed her progress very closely. Then, in February 2007, she decided to start trying for a baby with her husband, Steve.

“My new doctor told me what my chances were of getting pregnant,” Andrea said. “When I was diagnosed, he told me not to look online at the survival rate for stage one ovarian cancer. I later found out it was just 40 percent. I don’t think he believed that I was ever going to get pregnant. I think my chances were very slim – probably about three percent.”

But she was determined. She even started taking the medication Clomid, which is designed to encourage ovulation. However, the pill also raised the risk of bringing back her cancer. So, after five months of trying, she set up an appointment with a fertility clinic to discuss IVF options. But just before the appointment, she realized that she hadn’t started her period yet.

“I did a pregnancy test and was almost too scared to look,” she said. “I had a gut feeling that I was pregnant the same way my gut told me something was seriously wrong with me when the doctor kept turning me away. Steve and I just looked at it – we didn’t believe it – so we went out and bought another one in boots. It was funny because we were trying to be discreet but we kept bumping into people we knew. The second test showed the same positive result. We were over the moon. I knew everything was going to be OK. I knew this baby was meant to be. And he was.”

In April, 2008 Andrea welcomed a baby boy named Finlay. She also received another wish – the wish to move back to her home country in Scotland.

“I really wanted to return to Fife,” she said. “After being ill – it made me miss home more than ever. I wanted to be near my friends and family. At the time, I was thinking that if I got pregnant, I wanted to have my baby in Scotland. I wanted my baby to be Scottish.”

Now, living in her home country with the son she couldn’t feel more lucky to have, this mom says she’s glad she listened to her gut, and that she was able to have the support of both her husband and her surgeon.

“Finlay was even more of a miracle as he came from a tiny piece of ovary. I really feel I had to go through what I did in order to have him,” she said. “Luckily, my surgeon really listened to my wishes of not doing a full hysterectomy as being a mother was so important to me. Steve was 100 percent supportive of my decision – we discussed every stage of my treatment.”

She has the most beautiful little boy, who is now old enough to start school, to show for all that support and courage. And it’s not hard to see just how smitten she is over that amazing miracle boy.

“Finlay is a lovely little boy,” she said. “He starts school this year and he is very excited. Lots of women haven’t got any children. I feel very blessed to have been given the chance. I do worry in case anything will happen to him as he is my miracle boy and completes my life. I am very lucky to have Finlay in my life and my lovely husband Steve gave him to me.”

But even with that wonderful baby boy, Andrea still holds out some hope that there will be another baby in her near future.

“I am 40, so I am getting closer to menopause, which can trigger ovarian cancer again,” she said. “My doctor has advised I do have a hysterectomy, but I want to wait and see if I can get pregnant again. It’s a big operation so I would like to wait a little to see if there is a chance.”