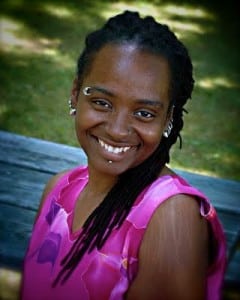 Michigan mother, Afrykayan Moon did what every breastfeeding mother of a two-week-old infant would do. She nursed her son because he was hungry. Sadly, however, a SMART bus driver in Moon’s town didn’t quite see it that way.

Moon was trying to board the bus with her two children and had her son in a football hold on Friday in Southfield. Moon stated that, as she was approaching the driver, she was asked to cover up or exit the bus. Moon refused to cover up and told reporters, “I had him in a football wrap. She wasn’t seeing much.” And then, she boarded the bus anyway.

As the nursing mom sat down in her seat, the bus driver told her, again, that she needed to cover up or exit the bus. Moon, again, refused. She belongs to a breastfeeding group and is aware of the state laws regarding her right to breastfeed and refused to walk away quietly, allowing the bus driver to discriminate against breastfeeding women.

The bus driver was a woman herself. According to Moon, the driver continued to harass her even after she was done nursing her son. Moon states that she was even cussed at and told by the driver that SMART didn’t want her on the bus. The driver even refused to move the bus until Moon got off. When Moon still refused to leave the bus in the Southland Mall parking lot, the driver called security.

Originally, Moon thought it was the local police that had been called. However, further investigation revealed that it was, in fact, security guards from the mall that responded to the call. They explained that they had been called to remove an ‘unruly passenger.’ Moon explained to the guards that she was just trying to nurse her son and had not done anything wrong. After hearing her side of the story, the guards left.

The bus driver could clearly see that Moon was not going to exit the bus at this point and had failed at getting her removed. So instead, she continued to harass the new mom about everything from the placement of her stroller to the repeated nursing of her son.

Because of all of the media attention brought to Moon’s story, SMART was forced to make a statement. According to their rep,

“SMART supports a mother’s right to breastfeed her child. It is our policy to permit this activity on all SMART buses. We have taken the recent complaint very seriously and are investigating the full incident. The driver involved in the situation has been taken out of service, pending conclusion of our investigation.”

Beth Gibson, from the SMART public relations department also told local ABC news that, “The woman was allowed to board the bus. SMART does not have a policy to forbid women from breastfeeding. No police were called and she was not asked to leave the bus.” SMART continues to stand by this statement. Southland Mall has yet to make a statement in regards to the security officers that boarded the bus.

Moon’s story might have ended there, if it weren’t for the fact that another woman, 39-year-old Marlo Dickson. Dickson noticed the driver and Moon arguing. She then realized that the argument was about Moon breastfeeding. Dickson was so outraged by the behavior of the driver that she told Moon that she was willing to be a witness to the event. According to ABC news, the two women had never met before that day.

Breastfeeding and the American Culture

I am not sure if Moon realizes just how influential her actions were that day on that bus. But, as a breastfeeding mom, I am proud of her. I am proud of her for standing up for her right to feed her child, regardless of location, time, or who was there. Women today need role models, like Moon, that are unwilling to let society place a stigma on her desire and ability to provide the very best nutrition she can to her child.

Situations like Moon’s are the exact circumstances that discourage some women from breastfeeding. They worry that they too will be embarrassed and harassed. Somehow, our society has moved from breastfeeding being the most widely used form of infant nutrition to it being an offensive act. In the words of Dr. Anna Strumba of the Providence Park Breastfeeding Clinic in Novi, “Society doesn’t view breasts as a source of food. This is something we have to deal with. Every other country does it.”

This social stigma seems to ignore the fact that formula will never be able to replace breast milk. The exact composition of breast milk is still unknown. Antibodies are provided through breast milk alone. And, breast milk changes as the infant grows to accommodate the child’s nutritional needs.

The social view of breastfeeding goes much further than a woman being asked to leave a bus because she is nursing her child. Women all over America that do decide to nurse are faced with other obstacles – obstacles that stand in the way of being able to successfully nurse.

Maternity leaves are a big issue. Researchers have proven that early returns to work often cause a nursing mother to stop sooner than she would have, had she been able to stay at home with her infant. Additionally, not all jobs or schools provide accommodations for nursing mothers.

Places to express milk are not widely found in the work place. I myself have had to express in a restroom, an examination room, and in my car. It takes a great deal of commitment to stick through conditions like these. It is easy to see why so many nursing mothers get discouraged after returning to work.

Support is often difficult to find for women. Not every nursing mother has a mother that nursed, like I did. They may not even have grandmothers that nursed. Lactation consultants are a valuable resource, but not always free. And, they aren’t available in every area.

In the last decade, breastfeeding has started to make a comeback. More and more women are realizing the benefits that their own milk can provide to their infants and they fight for their right to provide this benefit to their babies. Women, like Afrykayn Moon, are helping to transform the social views and hurdles when it comes to breastfeeding. And, while the transformation is slow, it is happening.