Home » Naomi Watts Strolls In The City With Her Boys

Over the weekend Naomi Watts was spotted out for a stroll with her boys Sasha and Sammy in NYC. 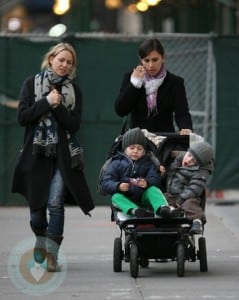 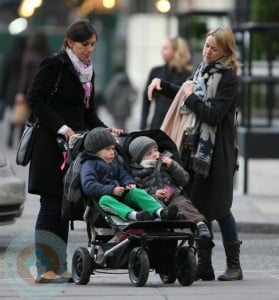 The boys, who were bundled up against the cold, rode in Mountain Buggy’s new double – the Duet.

Naomi recently revealed that her movie guises scare Sasha and Samuel.  While filming her upcoming political thriller J Edgar, the actress had to endure hours in makeup to look like a woman twice her age.

“In Thailand, I had blood all over me. So we had to talk about that a lot. In the end they came into the trailer and put fake blood on me. Just so they would understand it. It can be haunting, I think. Then at Halloween, I dressed as a clown and my youngest was in tears again. He really didn’t like it.”

Naomi has been busy filming her new indie film ‘Sunlight Jr’ in Southern Florida.  The movie, which is slated to be released next Summer also stars Matt Dillon and Norman Reedus.