In a small study with big implications, researchers found some of the strongest evidence yet that sudden infant death syndrome – a medical and sometimes legal mystery once known as crib death – may be caused by brain stem abnormalities. 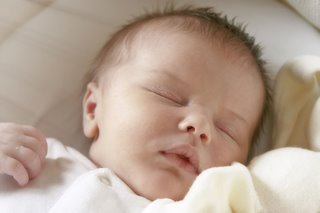 The finding “takes the mystery away from SIDS,” said Marian Willinger, a SIDS researcher at the National Institute of Child Health and Human Development, which funded the study. “It should take the guilt away from any parent who has lost a baby because they always wonder, ‘What did I do wrong?’ Now, they need to really understand, ‘My baby had a disease.’ ”

The brain stem abnormalities involve an imbalance in the way the brain uses the neurotransmitter serotonin. The brain chemical plays a role in regulating mood and is the target for many depression-fighting drugs. But it also influences breathing, body temperature and arousal from sleep.

These functions are thought to go haywire when susceptible babies are exposed to certain risks, such as sleeping on their bellies, which is a leading contributor to SIDS.

The researchers studied autopsied brain tissue from 31 SIDS babies and 10 infants who died of other causes. SIDS babies had about double the number of nerve cells displaying serotonin defects.

Right now, the defects cannot be detected until after death. The researchers hope their work leads to a diagnostic test that could identify infants at risk and allow parents to take precautions.

That will probably take at least 10 years, but the study results show the research appears to be headed in the right direction, said Dr. Hannah Kinney, a co-author and prominent SIDS researcher at Children’s Hospital Boston.

The study was published in Wednesday’s Journal of the American Medical Association.

“This finding lends credence to the view that SIDS risk may greatly increase when an underlying predisposition combines with an environmental risk – such as sleeping face down – at a developmentally sensitive time in early life,” said Dr. Duane Alexander, director of the government institute that backed the study.

Kinney said serotonin defects probably cause at least half of all SIDS cases.

Other theories for what causes SIDS include infections and mutations that cause heart rhythm abnormalities. But it is possible that serotonin defects are an underlying cause in SIDS cases attributed to some of those defects, said Dr. Debra Ellyn Weese-Mayer, a SIDS researcher at Chicago’s Rush University Medical Center.

While the study involved only a small number of infants, it is a convincing argument for the brain stem theory, said Weese-Mayer, who was not involved in the research.

SIDS kills more than 2,000 U.S. infants each year and is the leading cause of death in U.S. babies after the newborn period. Rates are similar in other western nations, but SIDS definitions vary elsewhere, so global rates are unclear, Kinney said.

In the United States, a death is pronounced SIDS after an autopsy and death scene investigation. A SIDS diagnosis means no other cause of death can be found in an otherwise healthy infant who dies suddenly. Over the years, some cases that were written off as SIDS proved to be homicides, sometimes committed by mothers who smothered their babies.

Also, 28 of the babies studied, or 90 per cent, experienced an environmental risk around the time of death, including respiratory infections, stomach-sleeping and sleeping in a bed or couch.

The risk of SIDS increases greatly when babies sleep on their stomachs. A nationwide campaign urging parents to place babies to sleep on their backs, launched over a decade ago, has helped reduce SIDS rates. Still, two-thirds of the SIDS babies in Kinney’s study were sleeping on their stomachs or sides when they died.