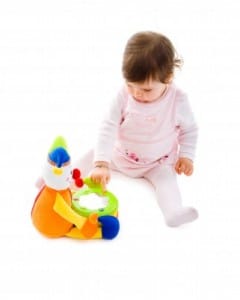 Memories are a funny thing. Most adults can’t remember anything before the age of 3 or 4. Yet there are some people that claim to have memories as early as 8 or 12 months. Most researchers believe that these early memories are a result of story reconstruction, which helps concrete the memories into existence. Yet, up until now, researchers have really had no way of telling which memories were real memories and which were shared memories.

To try and understand a little more about memories and how they work, researchers decided to devise a “magical contraption” to catch the attention of small children. They called the contraption the Magic Shrinking Box. To work the machine, children would place a toy in the top. They would then crank the lever, and out from the bottom, a smaller version of the toy would emerge. Lights and sounds accompanied the magical box.

Researchers spent two days working with 46 children between the ages of 27 and 51 months. They showed the children how to work the machine. On the third day, they asked the children if they remembered how the machine worked.

Six years later, researchers came back and interviewed the children. By this time, all of the children involved in the study were around 10 to 12 years of age. Before saying anything about the magic box, researchers showed each child the medal they had received for participating in the magical box study. Each child was asked if they remembered why they had received the medal.

Out of the 46 children, only one-fifth remembered the Magic Shrinking Box, but oddly enough, the age of the child at the time of the initial part of the study wasn’t a factor for whether or not the child remembered the box. Two of the youngest participants, who were under the age of three during their interactions with the Magical Shrinking Box, were able to remember it.

Since age wasn’t a factor, researchers then tried to determine if there were any personality traits that might have impacted whether the child remembered the box or not. Language skills, general memory abilities and more were considered. The researchers found no such link.

The only probable indication of why certain children remembered the box and others didn’t had to do with the child’s level of interaction while being shown the box as well as the amount the child talked about the Magical Shrinking Box after the initial portion of the study was completed.

“We did find that on average, children who remembered the events six years later talked about it more when it happened,” stated researcher Fiona Jack of the University of Otago. “Actively engaging in conversation could have helped memory development in general and about this particular event.”

Researchers had also interviewed the parents of the children during the follow-up session. Parents noted that children who remembered the Magical Box had talked about the box after the researchers had left. One child had even waited by the front door for the researchers’ return. This, again, adds to the thought that talking about the experience may have helped to preserve the children’s memories.