A New York Couple should go out and buy a lottery ticket pronto! 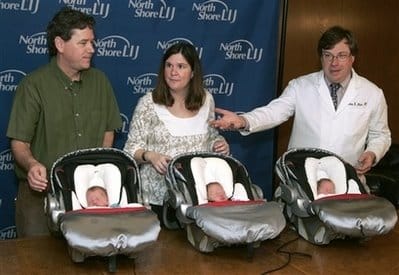 The couple, who had been trying for four years to have a baby, opted for in vitro procedure but hoped to avoid multiple births. There was no stopping the embryo from splitting once and then splitting again, however, and now they’re happy with their multiple sons, said Penn, 46, a wildlife biologist with the U.S. Fish and Wildlife Service, where his wife, Allison, 31, also works as an environmental educator.

The babies, who are unusually large for triplets, weighed , 4 pounds 12 ounces, 4 pounds, and 4 pounds 11 ounces.

Even though they went home Sunday, all three returned to the hospital for the news conference, each wearing a dot of nail polish on a different finger so their parents could tell them apart. The chances of having identical triplets is one in 200 million. *Each baby sits in a Baby Trend Flex Loc Infant Car Seat with Boot and they are cradled by the Velboa Snuzzler for head & body support.*