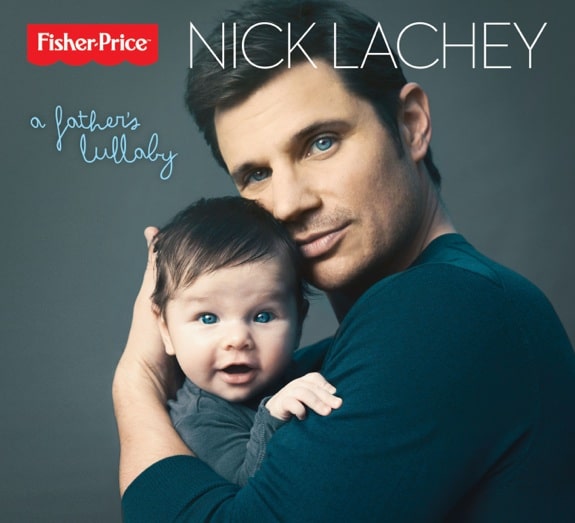 Nick and his wife, Vanessa, welcomed their son Camden in Sept. 2012 and have been reveling in parenthood ever since.

“When I first learned that I was going to be a father, I was inspired to create a special tribute to my son,” said Lachey. “Music has always been an incredibly significant part of my life and a meaningful way in which I express myself. Creating this album allowed me to further connect with Camden while also sharing the experience with families who are on a similar journey of welcoming a new life into their world.”

The album, which the singer produced in partnership with Fisher-Price, will feature twelve heartfelt songs, four of which are original tracks Lachey co-wrote including “Father’s Lullaby,” “Once Upon a Time,” “Sleepy Eyes” and “Another Day Is Done.” Additional hand-picked titles Lachey covers on the album include “All Through the Night,” “Baby Mine,” “You Are My Sunshine,” “All the Pretty Little Horses,” “When You Wish Upon A Star,” “Godspeed (Sweet Dreams),” “Hush, Little Baby” and “Brahms’ Lullaby.”

Favorites include the title song “Father’s Lullaby,” written as a loving tribute to both Lachey’s father John and to his son Camden, representing the passing of love from generation to generation. “Another Day Is Done” highlights how many memories and life lessons happen every day and the importance of embracing each moment. “Sleepy Eyes” is a song that Lachey hummed to Camden while he was still in the womb. In addition, two of the most personally meaningful cover tracks include “You Are My Sunshine,” a tune Lachey’s late grandfather sang to him as a child, and “Godspeed (Sweet Dreams),” a song whose lyrics help one truly understand the wonderment of parenthood.

“A Father’s Lullaby” will be available for download on iTunes and Amazon.com on March 13th, 2013 and will roll out to major national retailers including Toys”R”Us, Target and Walmart in April 2013.