Home » Nicole Richie Plays At The Beach With Her Family!

Nicole Richie and husband Joel Madden were photographed at the beach in Malibu with their kids Harlow and Sparrow on Monday(April 9). 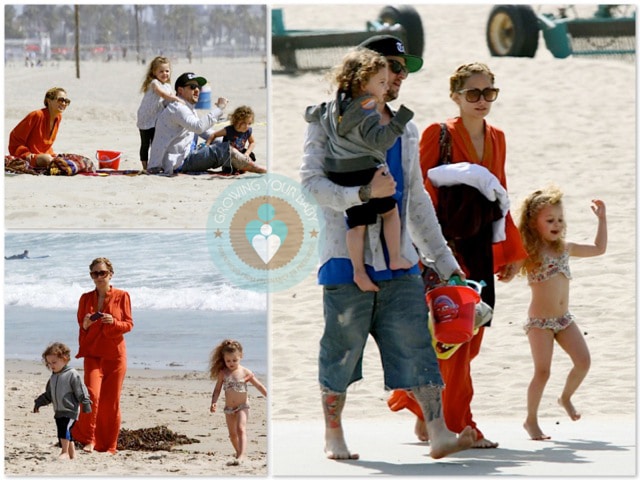 While dressed in an orange pantsuit, Nicole looked to be having a good time as she tossed a ball around with her kids before taking them down by the water to play.  The couple both took pictures of their kids running around the beach and playing in the sand.  Harlow posed for the camera in a cute two-piece bathing suit, while Sparrow stayed warm in a track suit.

Joel has been in Australia judging ‘The Voice’ with Seal, Keith Urban and Delta Goodrem.  The distance between the singer and his wife has set off rumors that their relationship is on the rocks.  Not happy with the reports Joel issued a statement a saying,

“I don’t usually comment on gossip, but seeing as this is something that is defaming my character and the sanctity of my marriage and family, I feel like I have to make something clear,” he wrote.

“My wife and my children are the most important thing in the world to me. I try very hard to be the father that (children) Harlow and Sparrow need and deserve, and the husband I believe Nicole deserves.”