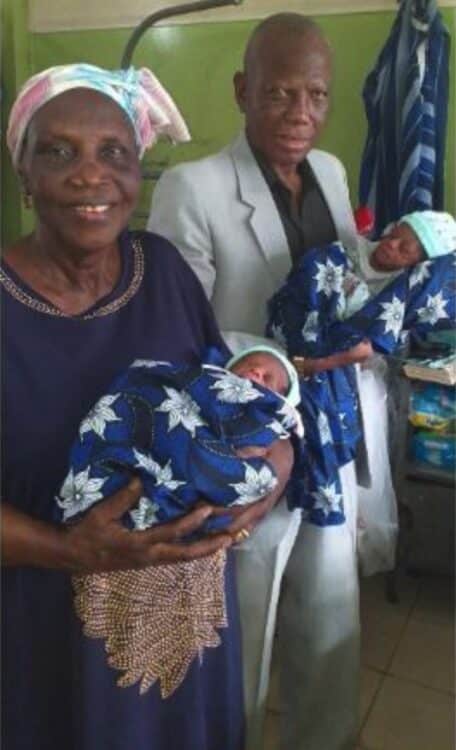 The new mom and her husband, Noah Adenuga, 77 long tried to have a child of their own.
The retired stock auditor told CNN, “I am a dreamer, and I was convinced this particular dream of ours will come to pass.”
The babies, who were conceived after 4 IVF attempts, were delivered via caesarian section at 37 weeks on April 14th at the Lagos University Teaching Hospital (LUTH).   The hospital delayed announcing the news to give the first-time mother time to recuperate.
Dr. Adeyemi Okunowo, who delivered the babies, told CNN a specialist team was assembled at the hospital to monitor the pregnancy because of her age.
“As an elderly woman and a first-time mother, it was a high-risk pregnancy and also because she was going to have twins but we were able to manage her pregnancy to term,” Okunowo told CNN.
Last September a woman in India set a world record by giving birth to twins at the reported age of 73.
While women at this age are able to conceive there are many “age-related medical complications that come with being pregnant at that age such as the baby being born preterm. She’s lucky but many may succumb to other complications during or after having a baby,” Dr. Okunowo said.