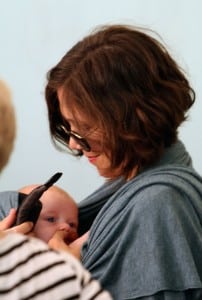 Maggie Gyllenhaal can testify to just how easy it is to judge parents before you have kids of your own.

“I used to be judgmental of the way other people would parent,” said the 34-year-old Won’t Back Down star. “I would look at someone talking on a cell phone while her baby was asleep in a stroller and think, ‘How can that mother have her cell phone out?’”

But shortly after the birth of her first daughter in 2006, Ramona, now 5 ½, Maggie’s perceptions on parenting, and people, shifted.

“Then you actually have a baby and you’re like, ‘She’s sleeping; I have 10 minutes; I’ll make three phone calls,” Maggie said. “I think so much of my judgment – not only about how people parent, but about people in general – went away when I became a mom.”

And with the birth of her second daughter, Gloria Ray, now 4 months old, Maggie’s perception on her own parenting powers changed.

“I was 28 when Ramona was born, and I had this idea that I think a lot of people in their twenties have, that I was supposed to do it perfectly. At least, if not perfectly, then exceptionally well,” she said. “I’ve realized that that isn’t possible, and that part of being human is making mistakes – and making lots of them.” 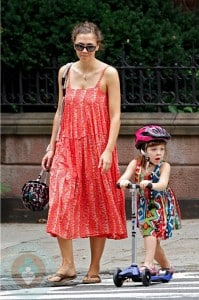 There’s one place that Maggie hopes she doesn’t make a mistake, however, and that’s in her daughters’ education. An advocate for strong education, Maggie says it’s “one of the most important gifts you give your kids.” She is concerned about helping her daughters in one subject, though…math.

“Besides literature, I liked history. I had trouble with math, though. I kind of faked my way through it. I don’t know how I’m going to help my daughters with it when the time comes,” the actress aid.

And then there’s the issue of learning how to say no. But Maggie says she doesn’t let “the element of parenting where you have to be a mom and say no,” stand in the way of having fun with her little mini.

“The fun part is being with this little person and learning about the world and listening to her questions,” Maggie said about daughter Ramona. “She comes and runs errands with me and we make it fun. When we talk, she talks like a person. She knows the words that she needs. She’ll ask me if she doesn’t. I like that.”