Who said wet nursing was a thing of the past? A nurse at a Jerusalem hospital stepped up to nourish a baby whose parents had been in a crash.

When a mother was seriously injured and the father killed in a car accident a pediatric nurse Ula Ostrowski-Zak at Hadassah Ein Kerem Hospital volunteered to tend to their nine-month-old. 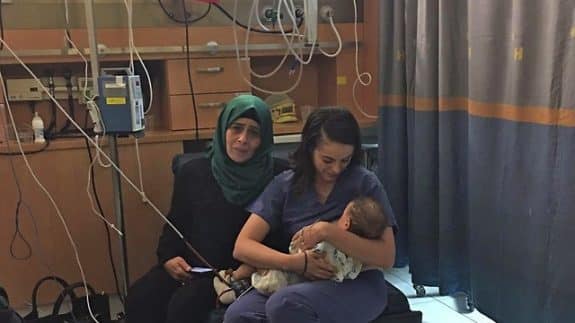 During her shift the nurse comforted and breastfed the baby – a gesture that surprised the tot’s family.

“His aunts were surprised that a Jew agreed to breastfeed him, but I told them that every mother would do it,” she told Ynetnews.

The baby’s parents were involved in a head-on collision that took the life of his father and seriously injured his mother.

The baby, who was lightly injured, was taken to the emergency room, where he refused to eat from a bottle. For seven hours he didn’t eat a thing and cried incessantly.

“They asked me if I could help them find someone who would breastfeed the baby,” said Ostrowski-Zak. “As a nursing mother, I didn’t hesitate and suggested that I do it myself.”

Thus, between caring for one child and another, the nurse fed the baby. “I fed him five times,” she said. “His aunts embraced me and thanked me. They were really surprised and told me that no Jewish women would agree to nurse a Palestinian baby they did not know.”

As the shift was coming to a close, there was concern about who would feed the baby when Ula went home. Looking for some help the nurse posted a request in the La Leche League Facebook group and was amazed by the response.

“Within two hours I received more than a thousand likes and responses from women who volunteered to help, women who were willing to travel even from Haifa to breastfeed him. In between, I continued to try to expose the child to the bottle but without success,” she said.

The baby’s mother is still in serious condition but the baby will be discharged from the hospital to stay at his grandparents’ home.   Thankfully his aunt will be on hand to continue to breastfeed him.