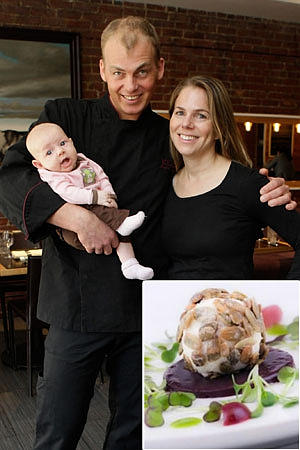 A Chelsea restaurant is getting some attention after the owner, Chef Daniel Angerer added cheese made from his wife’s breast milk to the menu at Klee Brasserie.

According to the chef’s blog, he decided to think out of the box after his partner, who is still currently breastfeeding the couple’s daughter, had an excess of Expressed Breast Milk piling up in the freezer.

In an attempt to be mindful of the value of the liquid gold, the chef came up with a little canapé of breast-milk cheese that is mixed with figs and Hungarian pepper.

It tastes like cow’s milk cheese, kind of sweet, with the flavor depends on what the cheese is served with – Angerer recommends a Riesling – and “what the mother eats,” said Angerer

Breast milk doesn’t curdle well due to its low protein content, so a little moo juice has to be added to round out the texture, Angerer said. 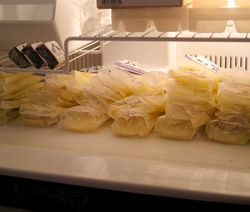 While the response has been generally positive from those brave enough to try the cheese, many customers are too squeamish to attempt it.

“I think a lot of the criticism has to do with the combination of sex and cheese, but . . . the breast is there to make food,” said Lori Mason, the chef’s wife.

Since the restaurant began offering customers a taste, Lori has been inundated with creepy queries, she said.

“Some people who clearly have issues have . . . e-mailed me saying, ‘I wasn’t breast-fed as a child, so can I taste your breast milk?’ ” she said.

After inquiries, health officials said yesterday that even though health codes do not explicitly forbid the practice, they have advised the chef to refrain from sharing his wife’s milk with the world.

“The restaurant knows that cheese made from breast milk is not for public consumption, whether sold or given away,” a spokeswoman for the city Department of Health said

As a breast feeding mom, I find this a bit disturbing so I guess it’s safe to say that there will not be any cheese made from excess EBM at our house.