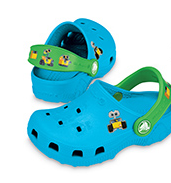 The family of a child whose foot was seriously injured in an escalator accident at the Atlanta airport is suing Crocs Inc., saying the Colorado-based footwear company failed to put safety features in the soft-soled shoes.

This is the second federal lawsuit filed this summer involving a child wearing Crocs injured on escalators at Hartsfield-Jackson Atlanta International Airport.

The latest lawsuit filed Aug. 26 by Clark Meyer, who is the father of a 4-year-old boy identified as “A.M.,” seeks $2 million in damages.

The family’s attorney said that the boy was riding an escalator at the airport July 15 when the machinery mangled his Crocs and “severely and permanently damaged” his right foot.

New York-based attorney Andrew Laskin, who is leading the case, also is handling the case of a 3-year-old girl from Louisville, Ky., injured when an escalator ripped skin from her foot and broke three toes in June.

Laskin is also suing Crocs over a child who was hurt at a Los Angeles mall. He has settled two other cases with the footwear company, but declined to comment on them.

“This is happening everywhere and Crocs is basically saying it’s the fault of the escalators — or the parents are not watching their children,” Laskin said. “But that would be the case only if it kept happening on the same escalator over and over again.”

In April, Japanese and Filipino authorities asked the Niwot, Colo.-based company to consider changing the footwear’s design because of similar escalator accidents in their countries.

The shoe company has promised to insert safety tags into its packaging by next year.

The U.S. Consumer Product Safety Commission has documented 77 soft shoe entrapments on escalators since January 2006 and issued a warning in May.

At least three children were injured in the last three months when Atlanta airport escalators gobbled up their flip flops or Crocs.

The airport began posting signs and airing public service announcements in August warning travelers of the dangers of “shoe entrapment” on escalators. Georgia Department of Labor workers examined the escalators and deemed them safe.

My son has never had a pair of crocs. They are not safe for younger kids to wear because of the way they walk. They don’t pick their feet up like adults do, they slide them along causing these shoes to fall off.

My girlfriend has this exact thing happened to her when she was in recently in NYC. We thought it was a one off, but I guess it has something to do with the design.