Little Bella Sophia Bonanni just couldn’t wait for the hospital to be born. Like most of the impatient babies we’ve reported on, the story will likely be told for years to come. But this story has a bit of an interesting twist; rather than being born in a car or in an ambulance, little Bella decided she’d make her grand entrance on a sled! 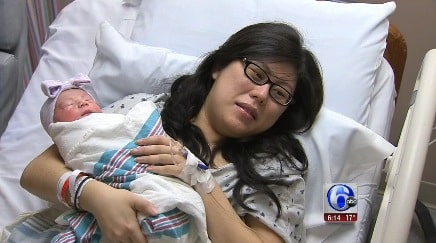 “I woke up with contractions, they were about 10 minutes apart. So we thought we had plenty of time to go to the hospital,” mom Shirley Bonanni told Action News.

Her husband, Fabian Bonnani, called his parents to come and watch their 2-year-old son, Logan. Then he drove the family car as far up the hill outside their home as possible. Unfortunately, it wouldn’t quite make it. He thought it might be walkable, but he decided to pull out a sled he and Shirley had just purchased for Logan the day before. 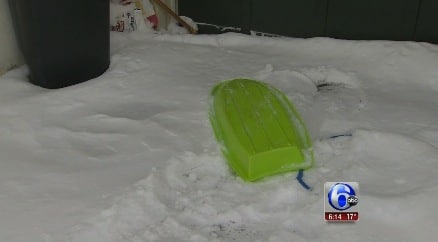 “It seemed like it was walkable to the car,” Fabian told Action News. “But I had the sleds just in case it was super-slippery, because we had that ice storm like a week or two ago.”

But by the time Shirley had finished her shower, the contractions were coming back to back. At that point, it became clear that they weren’t going to make it to the hospital.

“I took a shower and after the shower, it was like back-to-back contractions,” Shirley said. “Once we got out of the house, there was no way we were going to make it to the hospital.” 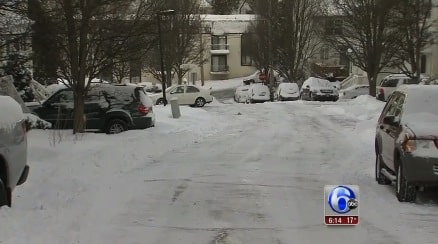 “In between contractions, I slid her down the road, and we didn’t even make it to the car,” Fabian said.

Thankfully, neighbor George Leader had seen the commotion and heard Shirley’s cries. He was the one called 911 and relayed information to Fabian so he could safely deliver their daughter in the -15 windchill temperatures.

“I was on the phone with 911, talking him through it and he certainly delivered his own baby, right there, on the side of the road,” Leader told Action News.

Right after she was born, Fabian wrapped Bella in blankets and rushed her into the house. Grandma and Grandpa – who had just watched their granddaughter being born – helped George pull Shirley back up the hill and into the house.

“As soon as the baby came out, we ran it up to the house in blankets, and then we took care of the mother, brought her on the sled,” Leader said. “We had her on a sled and brought her into the house.”

Eventually, paramedics were able to make their way up the hill to transport mother and baby to their original destination. Both are doing well, despite their harrowing journey to the hospital, and both are expected to return home within a couple of days.