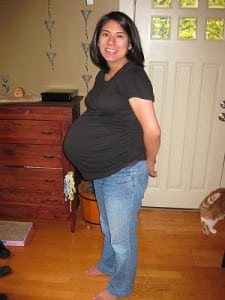 Janet Pittsenbarger is feeling healthy and awaiting the arrival of her three baby boys, due in November. The rare pregnancy is one that has never before happened at OHSU. Dr. Leonardo Pereira, the Director of Maternal Fetal Medicine at OHSU, says he has only seen one other case during his career. Even Janet and his husband were shocked by the news. At their first ultrasound appointment, the parents did not believe the technician at first.


“I don’t know if I believed her right away,” said Philip. “But sure enough we looked on the screen and there were three little blobs there.”

Janet has to take 19 vitamins a day, and is on a 4,000 calorie diet to keep the three babies healthy. Now in her 7th month of pregnancy, she has already gained 60 pounds. She is also on bed rest until the babies are due, though her doctor suspects they will come much sooner than her due date. The extremely large mama-to-be wants the babies to go as long as possible, but feels her body is nearing its limit.

Janet says she now mostly lies or sits and tries to stay comfortable as can be. She updates friends and family on the amazing pregnancy through her blog, Pitts Trip’s, while waiting to be far enough along for her boys to come safely. – Summer, staff writer