Our thirteenth profile is of an amazing set of twins named Charlton and Savannah. 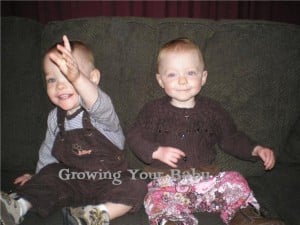 Charlton and Savannah were born at 24 weeks exactly on April 10th 2008. Dad Charlton says that he and his wife do not know why their little ones were born early.

This story was written by his wife for the March of Dimes.

When my husband and I found out that we were expecting twins, we were so excited. We couldn’t wait to share the good news with our friends and family.

I can’t think of one person, including me, who dreamed about their child or children in my case being born premature.

At just six months into my pregnancy (4 months before my due date) I learned at a routine ultrasound that my life was going to change forever. During the scan the technician was telling me how good the babies looked, but she then stopped and politely excused herself. She then came back with the doctor. The doctor then told me that I was 3 cm dilated and in labor. I called my husband to let him know what was going on, but was too upset to even speak. The doctor then got on the phone to fill him in. They transported me across the street to Morristown Memorial Hospital. Once I arrived at the hospital about 10 minutes later, my little girl’s water broke.

Once my husband arrived at the hospital we were met by the Neonatal Intensive Care Unit (NICU) doctor. He basically said that if our children survived the delivery they may have some serious handicaps as a result of their prematurity.

The hospital tried to stop the labor, but just after mid-night we headed to the Operating Room. There were about 20 people in the room, not quite the peaceful birth I had dreamed about so many times. There were teams of doctors and nurses ready to work on each of the babies.

The decision was made to deliver Savannah since her water broke. The doctor wanted to try and keep Charlton inside for as long as possible.

Savannah had a very rocky delivery. When she was born the silence in the room was very eerie, you could hear a pin drop. I remember lying there and looking over my shoulder to see her. But all I could see was a team of doctors and nurses working on her. She never made a sound. She weighed in at only 1 lb. 8 ounces.

In the midst of all of this, my doctor was reporting that Charlton needed to be delivered because both my blood pressure and his blood pressure were dropping. About 45 minutes later Charlton Jr. arrived via C-Section. When he was born I did hear a faint little cry. It wasn’t long before his team of doctors and nurses began working on him as well. He was smaller, weighing in at 1 lb. 6 ounces.

I was then moved to recovery. About an hour later and no updates, we were then escorted to the NICU to see our children for the first time. I had no idea and could not even imagine what a baby born at 24 weeks would look like.

The NICU was very dark and depressing. They wheeled my stretcher into a little room where there were a bunch of people huddled over two little isolates. Most new moms would be overjoyed to meet their little bundles of joy. In our case it was devastating to see two little babies who were so sick and hooked up to so much equipment. They were about the size of my hand and just slightly longer than a ball point pen. Their heads were smaller than a tennis ball and their skin was completely transparent. Their eyes were fused shut and their little ears were still not completely developed and Savannah was purple from being so badly bruised during delivery. It was probably one of the saddest days that I can remember.

The best way to explain life in the NICU is a roller coaster ride. We soon found out how that roller coaster worked. For the first few days they were doing ok. We then got a call about Charlton. His intestines perforated and had become septic. He needed life saving surgery. My husband and I rushed to the hospital, that hour and a half ride from PA to NJ seemed like a lifetime. We sat there waiting to hear how the surgery went. Thankfully it was a success. We then decided to head home to get some very much needed rest. Not even 24 hours later we got another phone call saying that our daughter needed the same life saving surgery. We then rushed back to the hospital. Thankfully her surgery went well too. Days after surgery, Savannah developed a really bad infection.

The worst day that comes to mind, which was about a week after the birth was when we arrived at the hospital and were escorted to a room to meet with some doctors, nurses and the social worker. We were then informed that our little girl had a severe bleed in her brain. A bilateral bleed of grade three and four. A level four is the worst. They told us if she survived she probably would have a limited quality of life. They also mentioned that both babies only had a 16% chance of survival.

My husband and I sat outside the hospital that day in the Gazebo, just devastated, we cried and we prayed for strength. We then decided to have our babies baptized that same day.

In the upcoming days we had some good and many bad. Our son had a difficult time with his lungs. His lungs kept collapsing.

Our daughter also had a host of issues and couldn’t breathe on her own for about four months.

It was about a month and a half before we could hold our babies, even then they would stop breathing while we were holding them. It was quite terrifying. The list of medical procedures, blood transfusions, infections and issues are endless. They spent about 4 ½ months in the NICU before they were allowed to come home.

Prematurity does not end in the NICU – Our twins are now 17 months old and still need a lot of follow up care. We have physical therapist, occupational therapist , speech therapist and even teachers at our house weekly. We also have a range of specialists that follow our babies. They include, Pulmonary, Neurology, Ophthalmology, ENT, Gastro, Developmental, Orthopedic as well as their pediatrician.

Over all, they are doing far better than what anyone could ever imagine for a 24 week baby, especially for twins. We won’t know the true effects of their prematurity until they are 3-4 years old. They are at high risk for Autism and Cerebral Palsy and well as learning delays.

Even though it seems like our life is very difficult, which it can be at times, we feel very blessed and thankful for our miracle babies. The March of Dimes has been instrumental in the research and development that gives children like mine the chance at life. Just to give you one example, both of our children received Surfactant Therapy, which helps aid the lungs. I don’t know that are twins would be here today without that therapy. And to that, we are extremely grateful.

Dad says that although Charlton and Savannah are delayed, they are both eating well and walking. They have a big sister named Ashley who was born full term.

If Charlton had one piece of advice for a new preemie parent, it would be: Hang on, things will get better.

I asked Charlton to describe his children in one word and he said “MIRACLES.”

I don’t think any of us can argue with that!

If you would like to read more about these two amazing children, you can go here to OUR MIRACLE BABIES