Our eighth profile is of a gorgeous little guy named Emery. 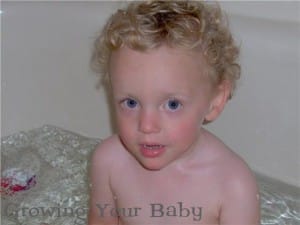 Emery was born on December 18th 2006 at 26 weeks. Mom Sarah had severe early onset pre-eclampsia. (A condition characterized by pregnancy-induced high blood pressure, protein in the urine, and swelling (edema) due to fluid retention.) His growth had stunted because he was not receiving any nutrients through the placenta.

At birth Emery weighed a mere 597 grams. Upon birth, his lungs were very stiff and could not take a single breath. He received surfactant* and was put on a ventilator to help him breathe. He stayed on the ventilator for 4 months (this is a tad long for a preemie who would generally average 4 to 8 weeks on a ventilator.)

In his early days Emery had a PDA (patent ductus arteriosus), which meant his already underdeveloped lungs were being deprived of oxygen but being filled with blood instead. He received multiple doses of a drug called indamethicin to close it and it closed after a few weeks. He actually was put on the surgical schedule to have it closed 3 times, and each time before the surgery the surgeon would order a round of the medication only to have the PDA close the day of surgery. It would open with 24 hours and this whole process would start again.

Emery had 30+ blood transfusions and also had pneumonia. He got heel sticks 4 times a day while on the vent. Multiply that by 120 days – his poor heels were in shreds and to this day he has little feeling in them.

He received four courses of dexamethasone (a corticosteroid drug used to treat inflammation) to help him off the vent. He did finally come off the vent to CPAP, where he stayed for just shy of 3 months. During this time he had an episode of crying, dropped heart rate (bradycardia) and unusually high respirations (around 120 per minute) that scared one of the nurses. As luck would have it, his ARNP (nurse practitioner) worked in the PICU before she came to the NICU and ordered a renal scan on a whim, and it turned out she was right. Emery had an extremely large kidney stone in his ureter. This is extremely odd for a baby. In fact, it happens in roughly 1:1 million babies mom was told by his neprhologist. Yes, he’s one in a million. The stone was so large that an adult couldn’t have passed it, but no one had ever done a kidney stone removal in a baby before (he weighed around 9 pounds at the time) so he had a reconstructive urological surgeon do the procedure. It took about 5 hours. The docs were pretty nervous about it because of his extensive lung problems and the fact that he would need to be re-vented after it took so long to get him off the vent, but Emery handled it very well. He still has many kidney stones that are in the kidneys and has hypertension because of it. He is monitored every 3 to 6 months and has been stable since.

Emery finally got to a point where he was stable from a respiratory standpoint but couldn’t eat so it was decided to put a G-tube in. Mom had the option of him staying in the hospital a while longer (but at this point it was close to 8 months) or sending him home with a nasogastric tube to work on eating a while longer. Mom didn’t want to put him through any more trauma so she chose the G-tube. It was the best decision for him.

Emery was in the NICU for a total of 225 days before coming home. Today, he’s nearly 3 years old and still has lingering effects of his prematurity. He’s developmentally disabled (which in layman’s terms would mean he’s borderline autistic/mentally retarded.) Those things cannot be diagnosed until he’s much older so he’s simply being monitored for it and treated with multiple therapies. Emery is considered PDD or pervasive developmental disorder. Physically mom says he does very well and can even walk up to two miles independently.

Emery still has a G-tube and hates to eat. He has a severe feeding disorder and oral aversion. The months of being ventilated damaged his throat and he does not like the sensation of swallowing. He is also a chronic vomiter due to reflux and still vomits every day. His parents have to check his blood sugars fairly regularly as well. He has an issue where if his blood sugar gets too low he’s incapable of keeping anything down and needs intravenous nutrition.

Emery does also wear oxygen still although this is not full time. He is respiratory compromised because of his BPD (bronchopulmonary dysplasia.)

Every day he makes progress though, in many areas. For him, only time will tell what’s in store for him, but he is pretty resilient and faces challenges with a smile.

I asked Sarah to describe Emery in one word and she said “CHARISMATIC .”

If you would like to read more about Emery and follow his life journey, you can go here to Littlemanbig: A Micropreemie Adventure

*A complex substance containing phospholipids and proteins. This surfactant acts like a detergent on the inner surface of the alveoli (air cells in the lungs), reducing the incidence of collapse. However, low surfactant can lead to lung collapse and atelectasis (inability of lungs to expand). Prolonged hypoxia and hypercapnia (increased amount of carbon dioxide in the blood due to decreased lung function and vasospasm) leads to acidosis.*