Our eleventh profile is of a sweet little girl named Charlotte. This family and story is very near and dear to my heart. 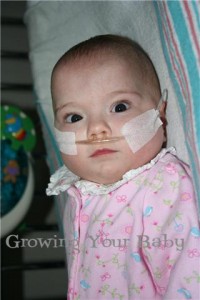 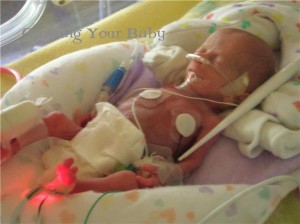 Charlotte was born on April 7th 2007 at 29 weeks and 5 days. The immediate reason for Charlotte’s premature birth was fetal distress. Her heartrate was dropping down to thirty beats per minute. There was no known reason for why this was happening. Mom Kelley also said she had low amniotic fluid and Charlotte was severe IUGR (IntraUterine Growth Retardation.)

At birth Charlotte weighed only 474 grams. As for the NICU stay, Initially mom and dad (Kelley and Vann) were hoping to only remain until she no longer needed oxygen. Charlotte was never on the vent or bipap, just nasal cannula. She had reached a weight of at least pounds pounds, however it quickly became clear that an extended hospital stay would be required. Oxygen as a long term requirement was obviously needed for her as she was diagnosed with pulmonary hypertension, reflux, chronic lung disease, heart defects (atrial septal defects and ventrical septal defects–tiny holes) and she refused to eat by mouth. Charlotte was later also diagnosed with dysphagia–a swallow dysfunction preventing her from eating by mouth because of aspirating the fluid into her lungs.

During her NICU stay she endured 20+ blood transfusions, an arsenal of tests, surgical procedures including a gastrostomy tube placement (surgically placed through an opening from the abdomen to the stomach) and a heart catheterization (doctor threads a catheter-thin flexible tube from an artery or vein in the neck, arm or thigh into the heart arteries or inside the heart.) Charlotte received daily sticks and pokes, more medications than mom can almost remember including an overdose of potassium at one hospital that sent her into cardiac arrest.

Charlotte had fluctuating electrolyte and mineral levels, multiple feeding issues, and reflux that we could not really control causing daily gagging/retching/choking. She also had issues with desaturations (A drop in oxygen levels due to apnea, obstruction or other medical conditions) daily.

The Lord was merciful to us and answered so many of our prayers for Charlotte. She never had any brain bleeds, all her cranial ultrasounds were normal, her eyes were developing appropriately as far as we knew despite long term oxygen therapy, she passed her hearing screening, and a spot on her kidney (which the doctors were watching very closely due to the high increase of kidney problems in two vessel cord babies & an elevated kidney hormone) completely disappeared! What a miracle! We always felt optimistic and overjoyed at each new milestone no matter at what age she achieved it.

After spending six and a half months at three different NICUs in the Atlanta area, Charlotte came home. Charlotte was on oxygen, was being fed with a feeding tube, and hooked up to the standard monitors for preemies (heart and oxygen saturation rates). She was on more than half a dozen meds. Charlotte still struggled with all the issues mentioned above and Kelley and Vann were led to believe that there was a chance that she would eventually outgrow and overcome the need for all her equipment-the oxygen, the feeding tube, as well as her reflux and heart defects.

Surgery was always on the radar for her heart if the holes did not close up as she grew. At nearly 7 months when she came home for the first and only time, she weighed in at just over 8 1/2 pounds. Charlotte was considered very medically fragile because of her lungs and heart and we were well aware that any respiratory illness could very well take her life. She was followed by a cardiologist, a pulmonologist, a gastrointerologist, and pediatrician. Despite all this, we were confident that–with time–she would have a full and enjoyable life and be able to do so many of the things that other children could do.

What mom and dad were not aware of (and uneducated about at the time) was the fact that her aspiration issues should have been addressed before coming home due to her reflux. Everything she was refluxing had the potential to be aspirated into her lungs.

After a mere six weeks at home, Charlotte developed an aspiration pneumonia that landed her back in the local Children’s hospital they had just left. A viral infection on top of this put her in the PICU (pediatric intensive care unit). Her premature body had difficulty fighting things off and after one week in the hospital she suddenly became much worse. Her lungs with all of the damage were unable to sustain oxygen levels. This was even with the maximum amount of support available in the medical field. After four long weeks of fighting, being on the ventilator and oscillator, dealing with the infections and treatments and multiple resuscitations, sweet Charlotte went home to heaven. It was January 14th 2008 and she was 9 months and 7 days old.

Kelley and Vann lost another baby girl at only 12 weeks 2 days due to a possible infection. They were however recently blessed with the birth of their son Owen who was born at 36 weeks after preterm labor.

If Kelley had one piece of advice for a new preemie mom, it would be this: Educate yourself on your child’s issues. You are the best advocate for your child. Look for support from others–online groups or local support groups. Parents of preemies encounter problems that most parents never even hear about. It can be a lonely road and you need people around you who understand the unique issues surrounding preemies and the equally as unique set of emotions that comes with having one and caring for one.

I asked Kelley to describe Charlotte in one word and she said “FIGHTER.”

There is no doubt in my mind that Kelley is right in describing Charlotte. This story has always been a part of my heart and Kelley and Vann are just amazing parents who deserve nothing but the best in the future. Charlotte was so very loved and is missed tremendously by so many.