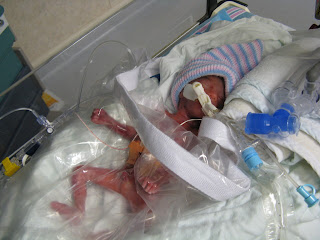 This story was sent to me by one of our readers Heather.

I became pregnant with identical twin boys in January of 2008.

At 23 weeks and 2 days my water broke and though the doctors held off contractions just long enough to get the steroid shots in me. Drayton and his identical twin Phoenix, were delivered by C-section at 23 weeks 3 days (Friday, June 27th).

At birth, Drayton weighed 420 grams (15 ounces) and was 11 inches long. Phoenix weighed 550 grams (1 pound 3 ounces) and was 12 inches long. After three days of life Phoenix developed a large pulmonary hemorrhage and died. We all miss Phoenix very much and feel very fortunate to have had the time with him that we did have.

During his NICU stay, Drayton was intubated and on a ventilator for 7 weeks, on CPAP for 5 weeks, and on a nasal cannula (low Flow) until a week before he came home – surprisingly without having to be on oxygen.

He was in the NICU for a total of 5 months and 5 days.

During that time he had his PDA ligated when he was a month old, laser surgery for his retinopathy of prematurity, surgery for bilateral inguinal hernias, a LADD procedure for a lower intestinal malrotation (along with an appendectomy), and a broviac put in for a central line. A G-tube was surgically put in in order to help with his feedings (his lung reserve was lacking so he was struggling to take all of his feedings by mouth).

Currently his lungs are doing well but even though he requires some inhaled medications and diuretics. He has some GERD and is on two reflux medications, but that is it. 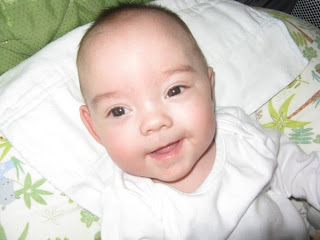 We are amazed at how well he has done after he was initially only given a 3% chance of survival (and that was with having multiple severe lifelong disabilities). So far, he has developed well and has managed to dodge any brain hemorrhages, Necrotizing Endocolitis, blindness, cerebral palsy and mental retardation.

Our Miracle baby is now seven months old and he weighs 11 pounds 13.5 ounces!


We pray that Drayton will continue to grow stronger and healthier every day.