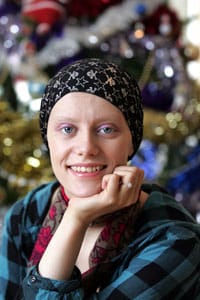 Being pregnant gave Rebecca Connelly, a 17 year old from Consett, a chance to discover the cancerous tumor that was growing inside her body.

When Rebecca became pregnant in February last year she also had an accompanying abdomen pain. Fearing that it might be some pregnancy complication she went to her doctor for a scan and found out she actually had a tumor the size of a melon attached to her kidney inside the body.

“The baby was normal but they found a mass near one of my kidneys. They did some further tests including an MRI scan and they could see it was a tumour. They weren’t sure if it was cancerous so they had to do a biopsy but that confirmed it.”

She also adds, “The doctors said the tumour could have been there for years growing slowly. They said that another six months and it would have become too big to be operated on. Becoming pregnant literally saved my life.”

Rebecca was diagnosed with a Wilm’s tumor which is a kidney cancer usually seen in kids under the age of five.  With the appropriate diagnosis now her mother Shannon believes that Rebecca could have been suffering as a child but at that time the cancer was not detected.

“She has always complained of having back pain but different doctors have always put it down to pulled muscles or growing pains.However, one of the doctors said the tumour was so big it had dislodged her kidney and was putting pressure on the rest of her body. I feel so guilty it wasn’t picked up earlier.”

After the discovery Rebecca and her fiance Alex Birdsall, had to make the painful decision of terminating the pregnancy.

“I was just coming to terms with being pregnant and then I had to get my head around having cancer as well. I doubt I could have dealt with it without the support from my mum. Firstly I had to have a termination. I then had one month of chemotherapy and at the end of that an operation to remove the tumour. The surgeons said the tumour was the size of a small melon and it was stuck to some of my organs.”

Because of the years it had remained in her body, the tumor had grown and had even attached to the main artery pumping blood to the heart. While removing the tumor doctors damaged the artery which caused a four hour surgery to be stretched to 9 hours with Rebecca spending another five days in the intensive care.

“The pregnancy was a shock but then the news of the cancer came. When I heard my heart just broke for her. It’s just not something you think of happening to a young person. Without the support of our friends and family we wouldn’t have known what to do.”

Rebecca concludes, “It’s the best Christmas present my family could have.”