Pregnant women are encouraged to stay fit and active during pregnancy to help reduce the risk to themselves and their unborn children. But 35-year-old weightlifter, Lea-Ann Ellison, has sparked a huge online debate after sharing photographs of herself lifting heavy weights just two weeks before giving birth. 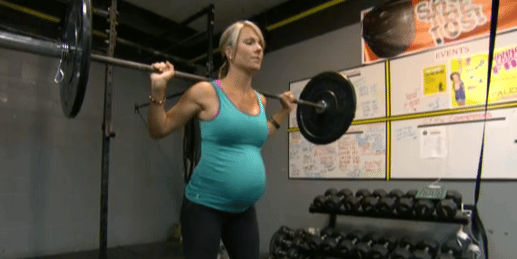 The Los Angeles mom-to-be can be seen hoisting kettle balls and barbells above her head. With the photos, she gave the statement, “I strongly believe that pregnancy is not an illness, but a time to relish in your body’s capabilities to kick a*s.”

Within just hours of the CrossFit regime follower’s post, more than 500 shares had taken place. Within less than five days, nearly 17,000 shares had been counted. That has resulted in some vehemently opposed comments regarding her fitness routine, which is described as a ‘strength and conditioning program [adopted by many organizations, including] military special operations units, champion martial artists and professional athletes worldwide.’

User Amanda Cinq-Mars wrote: “This is actually sickening. I hope pregnant [women] around the world do not do this kind of crap…I am a crossfit enthusiast but I DO NOT recommend this at all. Doctors always strongly suggest to not lift heavy because you can sever your placenta and cause major damage and  early labor and miscarriage…Posting this picture [gives] people the wrong message that it is OKAY when it’s not!!!”

Another user, Stephanie Herrera wrote: “Sure you look and sound cool, but we’re only human…why would you risk hurting your baby just to stay in shape?…That’s the stupidest thing I’ve ever heard. It’s not time to kick a*s. It’s time to be protective of your unborn child.”

But not everyone has lashed out at the expectant Lea-Ann. In fact, she’s had some pretty strong supporters on her Facebook page.

“Safe? Absolutely! A fit mama makes for a better pregnancy and delivery for both mama and baby!” user Jennifer Mosier Weaver said.

“I think that we should all be more concerned about a mum who eats McDonalds everyday of her pregnancy and doesn’t exercise one bit,” Charles Bailey, another user wrote.

Lea-Ann spoke out during the debate and thanked all those that had shown support.

“I want to thank everyone for their kind and supportive responses! Haters will hate and it’s ok,” she wrote. “My life is not their life, thank goodness! Lol! Again, thank you! It means so much to feel this much love from a community that I adore.”

The pictures and the heated debate that has taken place since the posting of the pictures poses the age-old question: Just how much exercise during pregnancy is safe?

The NHS guidelines state that a mother should stay “active and fit” during pregnancy since it helps with maintaining a healthy level of weight gain, labor and getting back into shape after birth. Furthermore, the guidelines add that you should “keep up your normal daily physical activity or exercise for as long as you feel comfortable.”

While speaking with us today, Dr. Adam Ofer, Director of Gynecology at Norwalk Hospital  applauded Lea-Ann for her fitness regime.

“I actually praise Lea-Ann for remaining active during her pregnancy. She is reducing her child’s future risks of developing obesity, diabetes and heart disease.  Although I do not know Lea-Ann’s medical history, assuming that she is otherwise healthy, exercise is safe and extremely beneficial to both the mother and the unborn child.”

In regards to the safety her routine, or weightlifting during pregnancy in general, Dr. Ofer said:

“You do have to be a little more careful not to hurt yourself when exercising or lifting heavy things during pregnancy. This is because of increased laxity of your joints and a shift in your center of gravity. However, when you know what you are doing and have good exercise form, there are no exercise limitations during pregnancy. The only sports we recommend against are ones that pose the danger of direct abdominal trauma (no tackle football during pregnancy!)…That said, please consult with your obstetrician to be sure you and your pregnancy are fit for your exercise program.”