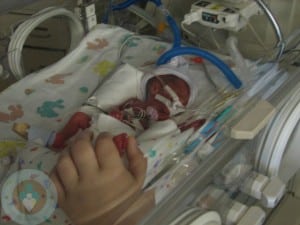 Preston Knight came into this world on May 23rd 2007 at only 27 weeks weighing a mere 480 grams. Mom Lindsay had pregnancy induced hypertension and baby Preston had severe IUGR (Intrauterine Growth Retardation-a condition in which the baby does not develop at the rate that it should.)

At birth Preston was so fragile he wasput on ventilator for almost two months before they tried him on CPAP.

Like many tiny babies, he went back and forth between the vent and CPAP until he decided to pull the tube out himself, forcing doctors to the try CPAP again, which worked. Not long after, Preston became septic and ended up having to go back on the ventilator.

This is definitely the roller coaster ride that many Neonatologists warn parents about.  One day everything looks good and then next your child may need surgery.


When Preston recovered from the sepsis and came off the vent, he was placed back on CPAP and then graduated to oxygen, which he remained on for about a week before his discharge.

During the course of our three month stay, we were called three times at home by the nurses saying that they were bagging* Preston and we needed to come quickly.

And even though Lindsay spent all day in the NICU (7am-10pm) with Preston, many of his episodes happened in the middle of the night except for the one time the family was in Intermediate Care and Preston turned blue in daddy’s arms.

Seeing our son turn blue and then grey, and not start breathing, was the most horrible moment in my life.

As soon as he was able to, Lindsay tried to nurse several times, but Preston was too small to latch on and couldn’t get the hang of it. So instead he was bottle fed with calorie-fortified breast milk.

He also had major difficulty with the suck/swallow/breathe, so we thickened his milk with Simply Thick. We were the first parents to use this in the NICU, and all the nurses and the feeding therapist were amazed at our success. Now the hospital recommends it to all their micropreemies that need thickened milk.

Preston received multiple blood transfusions during the course of his stay and mom and dad are eternally grateful for all blood donors.

I spent so much time in the NICU, the nurses ended up having me help them change IV tubes. They decided I knew how to do it after watching them 50,000 times, and being the person most concerned with his health!

Seeing babies come and go, they were always wondering when they would have their baby in the nursery meant for him at home.


I kept a journal where I wrote every day what happened with Preston. I am so glad I did, as I can look back now and read about how far we’ve come! 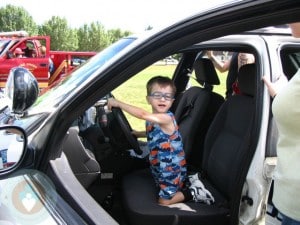 After 101 days in the NICU Preston was able to go home.

As for lasting effects from his prematurity, he does have mild cerebral palsy, chronic lung disease and sensory processing disorder.

There are no other children in the family but mom would love to have more.

I asked Lindsay if she could give one piece of advice for a new preemie parent and she said,

Take one day at a time.

When asked to describe Preston in one word, she said MIRACLE.

Preston sure is a little Miracle!!!


* Bagging a baby happens when the baby is not breathing well,

a team member places a mask (connected to an inflatable bag and an oxygen source) over the baby’s nose and mouth. As the team member pumps the bag, the baby receives oxygen-enriched air, as well as some pressure from the bagging, which helps inflate the baby’s lungs