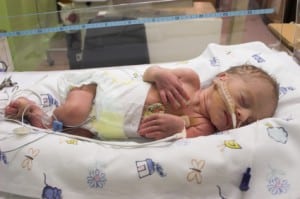 Parents often read to their children as a way to spend time together and bond. According to a new study, parents of critically ill newborns get the same benefit by reading to their infants in the hospital.

The study looked at 120 families that had ill infants staying in the neonatal intensive care unit (NICU) of hospitals. The infants were staying because they were premature, critically ill, or had genetic deformities causing problems. The families were urged to read to their infants during their visits at the hospitals to see if it had any positive effect.

For most of the families, 70 percent, parents reported that reading to their newborns helped them feel closer during the traumatic time. Being able to share that with their children gave parents a feeling of normalcy, and made some feel more in control of the situation they were in.

“As health professionals, we must give parents the tools they need to cope with the situation. Reading should become an essential tool in NICUs and follow-up clinics,” principal investigator Jan Lariviere, a nurse in the neonatal clinic and the neonatal intensive care unit at the Montreal Children’s Hospital, McGill University Health Cente, said.

For parents and newborns, the first few days of life can be a critical time for bonding. Infants who are premature or critically ill, however, are often separated from their parents for long periods of time. This can make the bonding process more difficult. Finding ways to help parents and these infants bond better is important for everyone in the family.

The results of this study on reading has been published in the journal Journal of Developmental and Behavioral Pediatrics. – Summer, staff writer