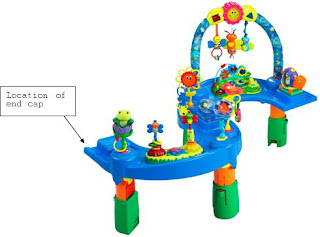 The U.S. Consumer Product Safety Commission, in cooperation Evenflo Co., today announced a voluntary recall of about 213,000 Evenflo Activity Centers because the cap on one end of the product can loosen and fall off, posing a fall hazard to a young child.

The recall involves Evenflo ExerSaucer Triple Fun stationary activity centers made between October 2006 and December 2008. The model number is 6231711. Stage 3 position involves converting the product into an activity table. No other ExerSaucer models use end caps and, therefore, no other models are included in this recall.

Consumers should immediately stop using the activity table in Stage 3 and contact Evenflo at (800) 233-5921 (8 – 5 ET M-F) or visit the firm’s Web site at www.exersaucertriplefun.com to receive a free replacement end cap. The product may continue to be used in Stages 1 and 2 without changes.