As parents we take every precaution to keep our kids safe. We cover electrical outlets, secure unstable objects, wrap table corners and barcade the stairs. But according to a new study, this may not be enough as the number baby-gate-related injuries among kids in the United States more than tripled between 1990 and 2010. 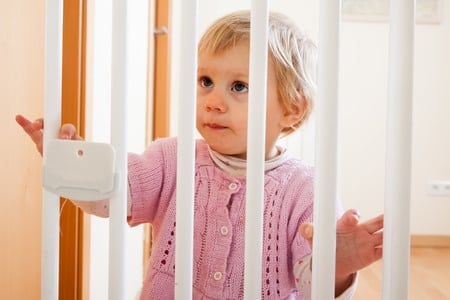 “We are probably seeing more of these injuries because parents are using these gates in their homes, which is good,” said study author Lara McKenzie, a pediatric injury-prevention expert at Nationwide Children’s Hospital in Columbus, Ohio. “But we maybe need to do a better job of [determining] where the gates are installed, and making sure that it is a good, secure fit in those places.”

When researchers examined data from the National Electronic Injury Surveillance System, a database of injuries collected from a national sample of hospitals they found 1,188 cases of baby-gate-related injuries over the study period. The children, they say, were older than two and 61 percent were little boys.

While many of the injuries were mostly as a result of kids pushing through gate, some happened as a result of sharp edges. The good news is that most of the toddlers only suffered soft-tissue injuries, such as bumps and bruises, and 97.6 percent were not hospitalized for their injuries.

“Baby gates are one of the most widely used home safety products, and they are meant to protect children from accessing stairways and doorways and other hazards in the home,” McKenzie told Live Science. “But the problem is that there is not always a good fit or match with the gate and the area that it is being used in.”