Popstar Ricky Martin has posted some great photos his precious twins on his website. 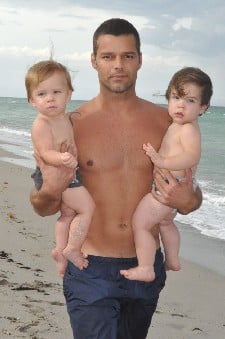 The laid back dad is pictured laying on the beach playing in the sand.

Ricky welcomed the Valentino and Matteo on August 18, 2008. After their arrival, his rep issued a statement saying,

‘In recent weeks, Ricky Martin became a proud father by the birth of twin sons.

‘The children, delivered via gestational surrogacy, are healthy and already under Ricky’s full-time care.

Ricky is elated to begin this new chapter in his life as a parent and will be spending the remainder of the year out of the public spotlight in order to spend time with his children.’

For the last year, the singer has managed to keep his boys out of the spotlight so it’s nice that he is sharing these personal images of them!