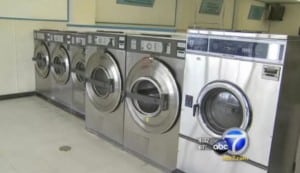 A 20-month-old baby is lucky to be alive after he was caught inside an industrial washing machine and thrown around for more than 4 MINUTES!

Witnesses reported that the toddler’s aunt placed him in the machine and was playing with him while his mother and grandmother were doing laundry nearby.

“When she locked it, the machine is on. The water is coming, the baby washing in the water,” said Balwinder Singh, who was nearby when the incident occurred.

The machine came on and it locked, preventing her from opening the door.

Mrs. Singh was next door working at the convenience store when she heard screams for help.

“The baby is spinning like more than four minutes. It was too scary,” said Singh. 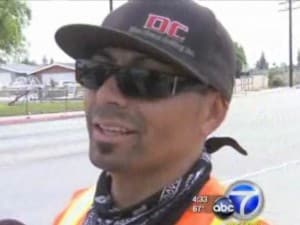 Construction worker Victor Gonzalez was outside working when he and another co-worker heard the commotion and ran inside the laundromat to see what was happening.

“At first I couldn’t see him because he was all wet with the clothes and everything but then again I saw half of his body in there,” said Gonzalez, an L.A. resident. “It was something else.”

The father of two, thought quickly and ‘grabbed the digging bar and just started pounding on the washer and pried the door open.’  Someone has already used a baseball bat and shattered the machine’s glass window, but they were unable to get the boy out as the washer continued its cycle.

Once rescued, the toddler was bloody and bruised, but after a minute he began to cry.

“I just did what I had to do to help the mom, she looked very desperate,” said Gonzalez.

The child was recovering at Loma Linda University Medical Center in stable condition as of yesterday.   The Ontario Police Department is investigating the incident. Child-endangerment charges could still be filed.