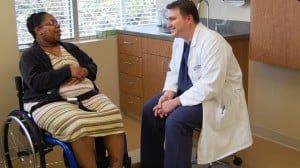 A car crash that occurred August last year will always remain in the memory of Krystal Pierre as the day when she lost her sister and grandmother. While the accident left Krystal paralyzed, it miraculously did not affect the two month old baby in her womb and she recently gave birth to a healthy baby boy, T.J.

Krystal, 29, remembers that day as a bittersweet memory as she had not expected to remain pregnant after the crash.

“All I could think was that I lost my sister and my grandmother. You feel guilty that you’re alive but also grateful.”

After the accident Krystal was left paralyzed from the breastbone down and underwent four surgeries during the course of her pregnancy.

Dr. Sean Blackwell, Pierre’s ob-gyn feels she was very lucky as it was only the first trimester of her pregnancy when the crash occurred.

“She was early in pregnancy at the time of the crash, so her uterus and the baby were still very tiny and protected by the belly,” Blackwell said. “It’s still pretty amazing that she was able to have these surgeries and the necessary medication and still deliver full term, vaginally.”

“Things were just on her side,” he adds.

Dr. Alan Peaceman, chief of the division of maternal fetal medicine at Northwestern Memorial Hospital in Chicago though opines that paralysis is not as big an obstacle during pregnancy as it is believed to be.

“We see lots of patients every year … who enter into the pregnancy paralyzed, and most are able to do very well. The main concern is a complication during labor known as autonomic hyperreflexia,” he says.

In paralyzed women when the internal organs are stimulated there is a surge of hormones and this may lead to rise in blood pressure. The hormone surge may be life threatening with each contraction for these women if they are not given proper medications.

In Krystal’s case she was given two epidurals but she also says that she could feel the contractions and also the baby moving and kicking throughout the pregnancy.

Compared to many other paralyzed women who cannot feel the contractions therefore, Krystal could feel her contractions, which made a vaginal birth more likely.

T.J. was named after his father Tony Joseph Pierre. He was born with a leg shorter than the other and doctors found that he had a bone missing in his left leg, but they don’t believe that the defect is related to the accident.

He will now undergo a surgery at the age of two to rectify his bone, but right now the family is at home enjoying the new life.

“We’re all just adjusting to having him. He’s the king, he rules everything,” Krystal says, laughing.