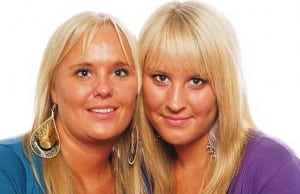 Anna Jones and Kirsty Cox had been together for six years when they finally decided to become civil partners in June of 2010. The lookalike couple wore matching gowns, tiaras and hairstyles. They were wonderfully in love, but they still felt as if something was missing from their relationship – a baby.

“It was the happiest day of our lives. But once we were married, it brought home how much we wanted to be parents,” Anna said.

Anna, 28, and Kirsty, 23, loved being around their nieces and nephews, but they desperately wanted a child of their own. But like many same sex couples, they knew that having their own child would be difficult – maybe even impossible.

“Every time my sister’s children came to stay, I’d tuck them into bed thinking, ‘I wish we could have a little one of our own,” Anna stated. “We weren’t able to afford fertility clinics and knew we could be on the NHS waiting list for years. We knew we’d make great parents, but told ourselves it probably wouldn’t happen and just had to accept it.”

But Anna’s sister, Lorraine, would soon surprise the couple with some amazing news. She had found them a sperm donor.

While having her hair done, Lorraine opened up to her stylist, Brian, about Anna and Kirsty’s dilemma. Brian was gay as well and he understood the difficulty that many same sex couples experience when trying to add a child to their family.

At first, Anna and Kirsty didn’t believe it, but before they knew it, Brian was having tea with them, discussing the details.

“He asked us loads of questions,” Anna stated. “Then he said we were lovely people and deserved the chance to be parents. He didn’t want payment and he was happy to have no involvement in the child’s life, if that’s what we wanted, so we knew there was no ulterior motive.”

So Brian had a medical exam to prove that he was in good health. Anna and Kirsty researched artificial insemination to find out how it was done. It seemed that everything would work out. But there was just one more little detail to iron out:

“We both wanted to experience carrying a child and giving birth,” Anna shared. “So we decided it was fairest to take it in turns until one of us got pregnant.”

When it came time to collect the specimen, everyone felt a little uncomfortable.

“We were giggling and kept chatting because we felt uncomfortable. But then I said, ‘Right, shall we get on with it?” Anna stated. “I handed Brian a plastic beaker we’d bought especially for the job and Kirsty and I went into the bedroom and waited.”

Shortly after, the women were thanking Brian for his contribution and he left. Kirsty would be the first to do the insemination. A couple of weeks later, Brian would visit again and leave a specimen for Anna.

At first, the couple was skeptical that either of them would end up pregnant. But just a few days after Brian left a specimen for Anna, Kirsty missed her period. At first, the test was negative, but the very next day, she tested positive. The couple was ecstatic.

“We were jumping around the kitchen with joy. We simply couldn’t believe this had happened on our first attempt,” Anna recalled.

But the couple would be in for more good news. Just two weeks later, Anna started having cramps. Kirsty started joking that Anna was pregnant, which, of course, seemed silly since Kirsty was already pregnant. But then Anna missed her period too. She took a pregnancy test…it was positive.

“We were in shock. I sent Brian a text telling him the good news,” Anna stated.

According to Anna and Kirsty, being pregnant together strengthened their relationship.

“We got to feel each other’s bump when the babies started to kick. And it brought us even closer as a couple,” Anna said.

But as the due dates drew near, the couple started to get a little anxious. Each of them wanted to be there for the other during delivery and Kirsty’s due date had already come and gone. Anna’s was fast approaching.

“I kept telling her to hurry up because I was due soon,” Anna said.

Their midwife had told them that they might deliver at the same time because of their hormones being in sync. But luckily, Kirsty went in for an induction 16 days after her due date and Anna was right there, by her side. After a 16 hour labor, Scarlett-Marie was born.

A little scared and nervous after watching Kirsty’s birth, the couple returned home with little Scarlett-Marie, where Brian was waiting with a huge bouquet of flowers. But their homecoming would be short. Just a few hours later, Anna started having pains and by the next day, they were back at the hospital.

“This time around, it was Kirsty holding my hand and telling me to breathe in and out,” Anna stated. After 48 hours of labor, little Alfie was born, just five days after his older sister.

So how’s the family doing now?

“We are loving every minute of being parents,” Anna shares. “We love watching them lying together and cooing to each other. It’s totally beautiful to see the bond between them. And Brian visits the children almost every week. He is happy to be called Daddy, if that’s what we want. When the children are older, we will tell them that they were his amazing gift to us. We are just so grateful he helped us both become moms.”