Six months ago, little Alexis Clarke was born at the UCSD Medical Center in San Diego. Weighing less than a can of soda, she was the smallest baby to ever be born at the center. Today, she is preparing to go home, hopefully by Thanksgiving – and her parents couldn’t be more grateful for their little miracle. 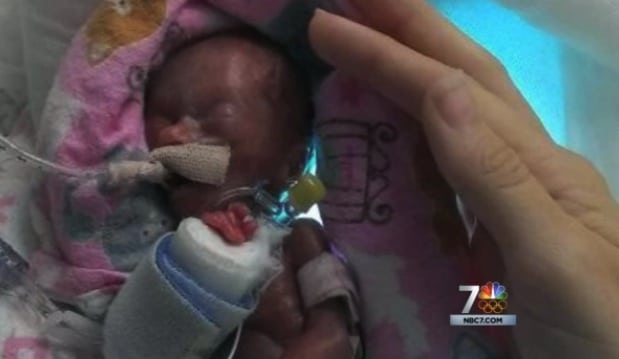 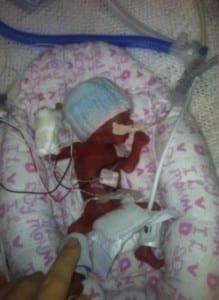 Alexis was born three-and-a-half months early at UCSD. According to Alexis’ mother, Laurie Clarke, doctors had to deliver early because of complications stemming from an under-developed placenta. But delivering her early didn’t give her much better odds of survival. In fact, doctors estimated that she only had a 25 percent chance of survival, and even if she did make it, doctors were concerned that Alexis would have significant and possibly permanent complications.

On top of the scary odds, Laurie spent month after month, watching her daughter fight to survive in the incubator, worried that Alexis wouldn’t make it another day, wondering what she could have done differently. The pain of it all was almost unbearable for the first-time mom.

“It definitely challenges every bit of strength that you have. I mean, not being able to hold her for almost the first three months of her life is heartwrenching,” Laurie said. “Honestly, it was a lot of, ‘What did I do wrong?’ Hearing that it wasn’t anything that I did definitely helped.”

But month after month, despite the odds, Alexis continued to improve, thanks to the round the clock care of the UCSD hospital staff and the amazing improvements in modern medicine. 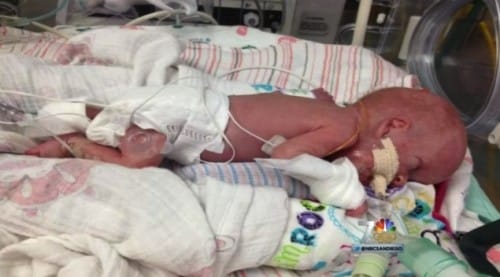 Now, six months later, Alexis weighs 7 pounds, 3 ounces, and she may even be able to come home in time for Thanksgiving.

“We count every day as such a blessing with her, and we know we are so lucky to have her. Every day, you just never know. I couldn’t imagine loving someone as much as we do her,” Laurie said. “We have something definitely huge to be thankful for.”

Even Alexis’ doctors are thankful – thankful that they were able to help the Clarke family, as well as many other families that, just a decade ago, might not have otherwise had surviving infants.

“I’d say just in the past six years, we’ve had babies survive that we didn’t think could survive…Twenty years ago, she wouldn’t have survived,” Alexis’ doctor, Krishelle Marc-Aurele, of UCSD Medical Center told San Diego NBC News. “I can’t believe it. I can’t believe she’s 10 times bigger than she was. I can’t believe she looks like a normal baby…We’re happy to see her go.”