Fox News is reporting that 17,000 kids per year are injured on school buses. This report has re-ignited the arguement for seat belts on school buses. While 17,000 is less than 1% of the kids nationally that travel on school buses it’s still way too many to not look at other safety ideas. 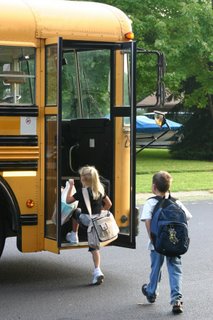 Nearly one-fourth of the accidents occur when children are boarding or leaving school buses, while crashes account for 42 percent, the new research shows.

Slips and falls on buses, getting jostled when buses stop or turn suddenly, and injuries from roughhousing are among other ways kids get hurt on school buses, the data found.

Injuries range from cuts and sprains to broken bones, but most are not life-threatening and don’t require hospitalization. And while the numbers are higher than previously reported, they represent a small fraction of the 23.5 million children who travel on school buses nationwide each year, the researchers said.

The researchers said the results provide a strong argument for requiring safety belts on school buses, something industry groups say is unnecessary and is more than many school districts can afford.

Safety belts, particularly lap-shoulder belts “could not only prevent injuries related to crashes,” they could also keep kids seated “so they’re not falling out of their seats when buses make normal turns or brake,” said lead author Jennifer McGeehan, a researcher at Columbus Children’s Hospital’s Center for Injury Research and Policy in Columbus, Ohio.

“Our study shows that there needs to be continued vigilance on school bus safety,” McGeehan said.

The study appears in November’s Pediatrics, being released Monday.

The research, involving nonfatal injuries treated in emergency rooms, is based on 2001-2003 data from a surveillance system operated by the U.S. Consumer Product Safety Commission. Some 51,100 children up to age 19 were injured during the study period, or about 17,000 annually, the researchers said.

Data from the government’s National Highway Traffic Safety Administration through 2005 show that about 8,000 children are injured each year in school bus crashes but on average fewer than nine are killed — numbers that have remained stable for the last decade or so, the agency said. The tally is based on police reports, and not all injuries resulted in emergency room treatment.

In a 2002 report to Congress, NHTSA recommended against lap-only belts in school buses because they can be risky, especially in small children, by restraining them high on the abdomen, potentially causing internal injury in a crash.

“It’s an expensive proposition to outfit school buses with lap-shoulder belts, not just because of the cost of the equipment but because it also reduces seating capacity,” said Robin Leeds of the National School Transportation Association, an industry group that represents school bus companies.

She said school buses are the safest way for kids to get to school, with or without safety belts.

The American Academy of Pediatrics advocates having lap-shoulder belts on all new school buses and supports having adult monitors on buses, too, said Dr. Barbara Frankowski, a Vermont pediatrician and chair of academy’s council on school health.

However, Frankowski added, “it’s kind of unfair to say each individual district has to suck up the cost.”

Safety Council of Canada’s website has this to say on the issue:

Seat-belts were designed for cars, and have saved thousands of lives. School buses are designed with safety (but not seat-belts) in mind; they are not built like cars. Buses are much larger, higher and heavier than other vehicles on the road, so they have a body-on-frame design. For seat-belts to enhance rider safety, the bus body would have to be completely re-engineered with seat-belts integrated at the design stage.

Beyond the engineering problems someone would need to ensure the seat-belts are used, adjusted properly between uses by small and larger children, and repaired when damaged. In an emergency, seat-belts could hinder evacuation. Young children should not be placed in a situation where they must become responsible for their own safety.