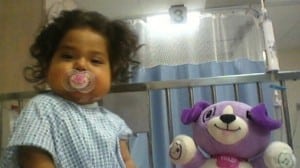 Delilah Nevaeh Valdez looks like any other 19 month old today with chubby cheeks, sleeping peacefully with a pink pacifier in her mouth but only a few months back doctors had given her just 24 hours to live. It took 7 organ transplants and dedicated efforts of medical team to save the baby.

Julissa Cerda, 24 had given birth to Delilah 6 weeks early in September 2009. Doctors told the new mother and father Agapito Valdez that their baby was dying.

“When she was born they gave her 24 hours to live,” said Jullissa.”They basically told us she was going to die because she couldn’t eat.

“Delilah had a condition in which her smooth muscles don’t contract normally. When she ate, the food would not go south …”

Three months ago doctors decided to transplant seven of the baby’s organs to help her eat. These were the liver, stomach, pancreas, small intestine, large intestine, kidney and spleen.

As a 16 month old in January this year Delilah underwent the crucial surgery at Jackson’s memorial. The transplant was the 299th at the hospital, but even the doctors knew that it was the post surgery recovery that was important.

Says Dr. Andreas, “The amazing thing is not just what happens with the surgery, but that the recovery these patients make can be complete. God willing, if patients survive one year, they usually do fine for a very long time. Four or five years can mean a lifetime.”

The transplant was successful and what was an even better news was that the little girl learnt fast to eat food.

“Most babies that need this transplant eat by being fed with an intravenous line through their vein,” Garcia, a pediatric gastroenterologist at the hospital said.”Because of that, they don’t learn how to eat normally and have food aversion.”

But in Delilah’s case, things were different.

Now 19 months old and more than 26 ½ pounds Delilah will be leaving Jackson Memorial with her parents by the end of this week. Her parents have also not forgotten the special gift of life they received from the unknown 3 month old whose organs were donated to their daughter.

“They flew the organs over and it happened so fast,” Cerda said. “But in order for us to gain the gift of life for our daughter, someone else had to lose theirs. I keep that baby and the family in my prayers all the time. I feel like I won the lottery, but I can only imagine their pain.”