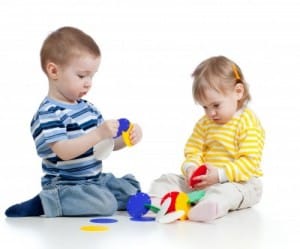 It has been long believed that toddlers are inherently selfish. A recent study from the University of B.C., however, contradicts this belief. Their research showed that children give because it makes them happy.

After finding that the portion of the brain that processes rewards is activated in adults after donating to charities, researchers wondered whether the activity was due to extrinsic or intrinsic factors. Testing children could help give them the answer.

“Looking at young kids helps us get a little closer to understanding whether this is something rooted in human nature or not,” said Lara Aknin, a PhD in social  psychology, co-designer of the study.

She says that many news and parenting sites, as well as parents themselves, argue that children are inherently selfish, self-absorbed and even studies have indicated that young children can be territorial with their possessions.

“But you also don’t have to look far to see really young kids wanting to share their soggy Cheerios,” Aknin pointed out. ”There is this dichotomy when we look at kids, and I think most people’s assumptions are that kids are self-oriented and hoard things for themselves.”

But researchers found the exact opposite to be true when performing a small controlled study through the UBC’s Center for Infant Cognition. In that study, 20 toddlers with an average age of 22 months were given treats and were then asked to share them with a monkey puppet.

The experiment was recorded on video and researchers used the facial expressions of the tots to gauge the child’s level of happiness on a seven-point scale. The bigger the smile, the higher the points. Consistently, the children seemed happier when giving rather than receiving. Additionally, they were most happy when sharing their own possessions.

The data is consistent with other studies that have shown children do good deeds spontaneously, even if it means walking away from something fun. But Aknin says further research is needed to determine if the sharing happiness remains in a larger group setting. She’s also curious as to whether or not sharing enjoyment at a young age can predict things like philanthropy and generosity later in life.

Honestly, I agree with the study. Most children are compassionate, loving and giving human beings. Are they always? No, but I also believe very strongly that the way we view our children impacts the person they become. For example, if you see your child as kind, generous and loving, I believe that they tend to mirror those views. Likewise, if a child is seen as inherently selfish, self-centered or possessive, they are likely to mirror that perception as well.