Having a set of triplets is no longer rare because so many sets are conceived via fertility treatments.

A couple in Singapore was surprised when an ultrasound revealed they were having 3 babies instead of one and then even more surprised when they found out that the babies were identical. 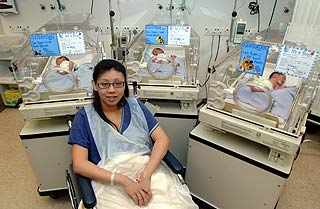 Triplets are, in themselves, rare, but 30-year-old Gladys Lim’s babies are further up the rarity stakes: They are identical, and were conceived naturally to boot.

Most triplets are the result of fertility treatments, in which two or more fertilised eggs are planted in the womb.

Ms Lim and her husband Joey Chiew’s three sons, however, came from a single egg which split into two. One of the two then divided again, to make three babies.

The couple, who have a 16-month-old daughter, were ‘shocked and surprised’ when told, eight weeks into the pregnancy, that they were expecting triplets.

I believe the chances of this happening are something crazy like 1 on 200,000,000. These parents need to buy a lottery ticket!!