In a city which often witnesses movie scenes being shot in a similar way, it was a real rescue operation when the toddler dangling from a third floor window safely fell in a stranger’s arm and on to the mattress.

Konrad Lightner and his wife Jennifer from Burbank, California were packing and moving apartments when they noticed a toddler dangling from the third story window of an apartment. They saw the toddler throwing stuff toys from his window and asked him to stop knowing the danger he was in.

But the toddler crawled out of the window and they called for help.

“We called 911 and Konrad threw the box spring down trying to break his fall and stood there to catch him,” Jennifer Lightner told the LA Times.

Burbank Police dispatcher reported minutes later that the boy had fallen and was entangled on some electric wires under the window.  Burbank fire Capt. Peter Hendrickson arrived shortly.

And as the toddler fell, it was Konrad’s strong arms that caught him and both landed on the mattress.

“It feels like I watched a TV show, like it didn’t happen to me,” said Konrad later.

He says he put his arms around the falling child and lowered him real fast to the box spring. 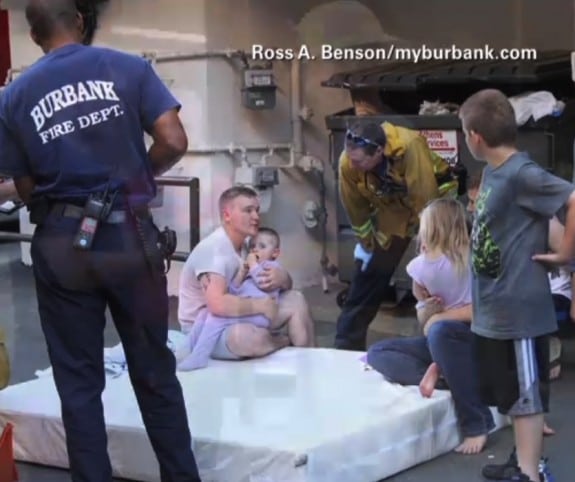 The whole episode “didn’t seem real until he was hanging from (a) chord, because there was no way he was going to get back.”

It was then, she added, that the couple threw down their box spring mattress.

The parents of the child were in another part of the apartment and came running down stairs when they heard the commotion.

The firefighters and paramedics who had arrived quickly checked the child for injuries and transferred him to the hospital for minor cuts and bruises. 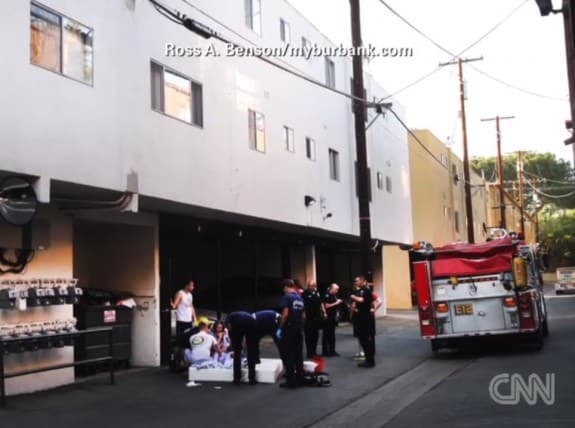 But the firefighters felt Konrad had done an exceptional job. Firefighter Eric Rowley, who was one of the firefighters on the call, and also this year’s ‘Burbank Firefighter of the Year,’ carries a Burbank fire department challenge coin. The coin is the same as those carried by soldiers since WWI and is given following brave acts and good deeds to fellow soldiers.

For his quick thinking, Konrad was presented with this coin by Rowley and the fire Department.

Emergency personal on the scene recalled that a similar incident had occurred a few years earlier but that child was not this lucky.

They said this incident is a good reminder for all those who live in apartment buildings to check that their windows and doors are secured and safe for children.

“I’m not a hero, I just walked by and just tried to help. Just something happened and we were there. We were lucky to be there.”